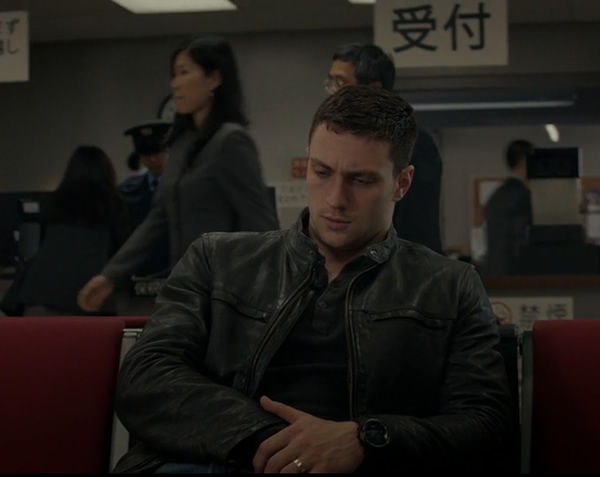 In the movie Godzilla (2014), Aaron Taylor-Johnson plays as Ford Brody who’s a marine and son of a nuclear physicist who drags him into his obsesive investigation into what went terribly wrong at his plant some 15 years ago. The incident took the life of Ford Brody’s mother and his father hasn’t stopped finding out what’s the cause.

Fast forward 15 years later, Brody is in the marines and happily married with a wife and son. That is when the deadly montsters start appearing and he needs to protect not only his family but also the lives of many people. In the movie, he’s spotted wearing a Suunto Core Alu Deep Black. The watch comes with a 49mm aluminum coated case and a black rubber strap is for the active outdoor enthusiasts. It comes with a mineral glass and is pretty light. It comes with a host of features such as altimeter(to know how high you are), barometer(to check air pressure), compass and temperature. With the barometer, it’s able to tell you if a storm is coming with its storm alarm.

The watch is 30 metres water resistant and you can measure the depth when you’re snorkeling. It also has alarm clock, dual time, countdown timer, stopwarch timer and a electro-luminescent backlight to see in the dark. It uses a user replaceable battery which should last for a about a year depending on usage and it also comes with a low battery indicator to let you know it’s time to replace it.

This watch retails for $450 but it’s available at Amazon for around $284. Check out the movie shots of this Suunto Core Alu Deep Black in action. Also check out the watch review below:-