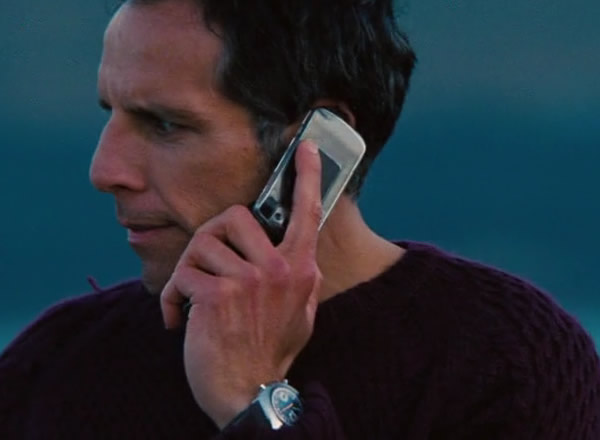 In The Secret Life of Walter Mitty (2013) movie, Ben Stiller acts as Walter Mitty who is a timid magazine photo manager also known as a negative assets manager at Life magazine. Walter lives life by daydreaming a lot but he soon embarks on a true-life adventure when an important negative #25 goes missing for its final print edition. Apart from that, he’s also trying to woo a girl he has a crush on.

In the movie, he’s seen wearing a stainless steel face watch with a black strap. It’s pretty cool in the sense that you see him wearing a watch that follows him everywhere from his formal work place, to jumping down from a helicopter into the Greenland ocean, to the Iceland volcano, to the Himalayas and in his casual wear around the city. The watch looks good in all situations and should be a tough watch to withstand that kind of a beating. So what watch is it? Too bad I couldn’t identify it though. Here are some shots of the watch in the movie. The watch seems to be like a chronomatic looking watch with 2 subdials and crown at 9 o’clock with 2 pushers at 1 and 4. It also looks like it has an orange seconds hand. The case also seems to be lugless. If you ask me it sure looks like these 2 watches below:- What do you guys think? Share your thoughts in the comments below:-

More Under: Ben Stiller, The Secret Life of Walter Mitty, Watches In Movies