In the movie Olympus Has Fallen (2013), Gerard Butler plays as Mike Banning who’s a disgraced former Presidential guard and finds himself trapped in the White House from a North Korean terrorist attack. As the national security team scrambles to respond, they are forced to rely on Banning’s inside knowledge to help retake the White House, save the President and avoid an even bigger disaster.

In the movie, you can see Gerard Butler wearing a Casio G-Shock Gulfman G9100-1 while dodging rockets, bullets and also in hand-to-hand combat. This is a tough watch which is shock resistant, rust resistant and also 200 meters water resistant. Also perfect for seafarers, it provides moon data and a tide graph so you’ll always know what the tide is. 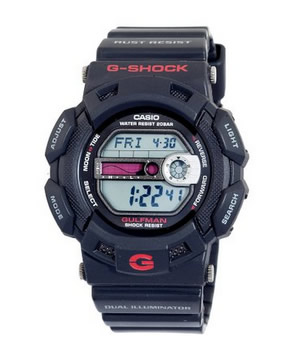 The digital watch is also a world watch with 29 time zones, 3 multi-function alarms, a countdown timer, a stopwatch, and auto electroluminescent backlight with Afterglow. The Afterglow is basically the backlight still remains litted after a few seconds. The CR2025 battery it uses gives it a good 7 year lifespan. This watch retails at $100 but you can get it for around $69 at Amazon. Check out the movie shots and a video preview of the Casio G-Shock Gulfman G9100-1 below:-