I remember when I first ventured into modding many years back. I started off with a simple mod with the Seiko SKX173, then on to a Seiko “Seamaster” and lastly a black DLC mod. Back then, there were only few choices for modding parts. Dagaz and Yobokies were the main suppliers in feeding this addictive hobby. If you dared not attempt this tortuous surgery on your watch, then it’s another challenge to find someone who can do the mod for you.

There are many reasons why people mod. Personally back then, it was to replicate the look of the watch that I liked into a so-called “homage” watch. It’s a controversial topic in the watch community and I’m not going to debate about it but just to say it led me in a positive direction in finally acquiring my grail watch which is the Omega Seamaster Diver 300M.

I thought I had enough of modding once I started collecting more serious watches but fast forward to 2020, I find myself coming back to where I started and enlivened about the current state of the modding community.

One of the things I found lacking were the availability of good quality dials. A few outfits cropped up in recent times to fill that gap and they are mainly based in Singapore. One that I found out recently was Komoworks. When I dug deeper, they were already doing pre-orders for the second version of their successful KOMO Seigaiha dial. Seigaiha, the term given in Japan is a popular motif which means blue sea and waves and first appeared in the 6th century. These overlapping wave patterns is an important symbol and deeply ingrained into Japanese culture. I have seen this pattern on some aftermarket dials being sold but was never really attracted to it until I saw the ones from Komoworks which was beautifully executed. Needless to say, an order was placed. 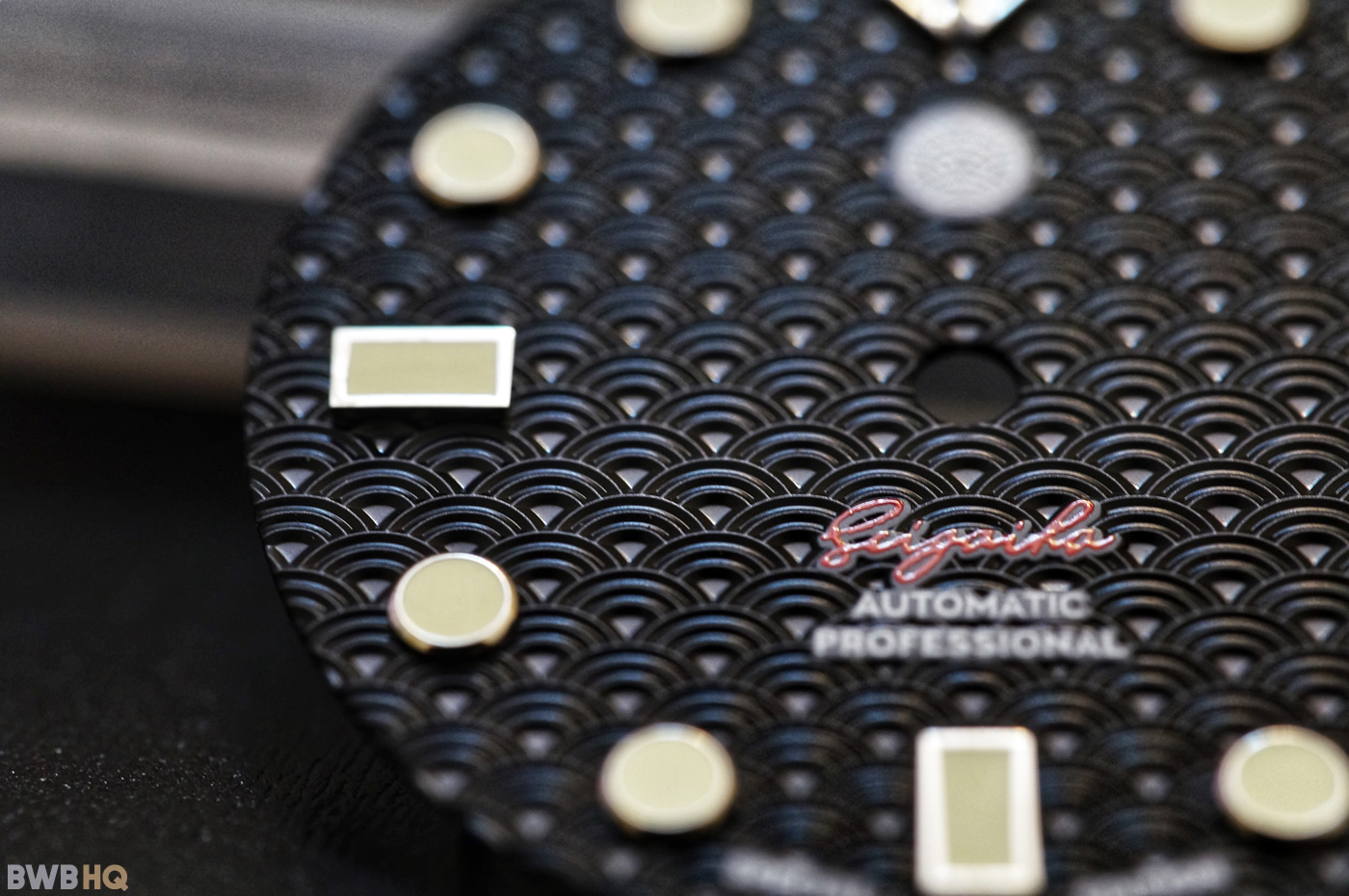 For this mod, I will be retiring my “Seamaster” mod and reusing the case which is from discontinued model reference Seiko 5 SNK027. The Seigaiha dial has feet for both 3 o’clock and 4 o’clock movements and if you’re not sure which to clip off, just refer back to the previous dials you might have. I was reusing one of the 7S26 movement with black date wheel that I had. The dial fitted though the feet required a bit of force to get it all the way in. For the hands, I felt that the GS diver hands would match this nicely. After some tries and mishaps which is typical if you don’t do this often enough, I’ve managed to put it in place. 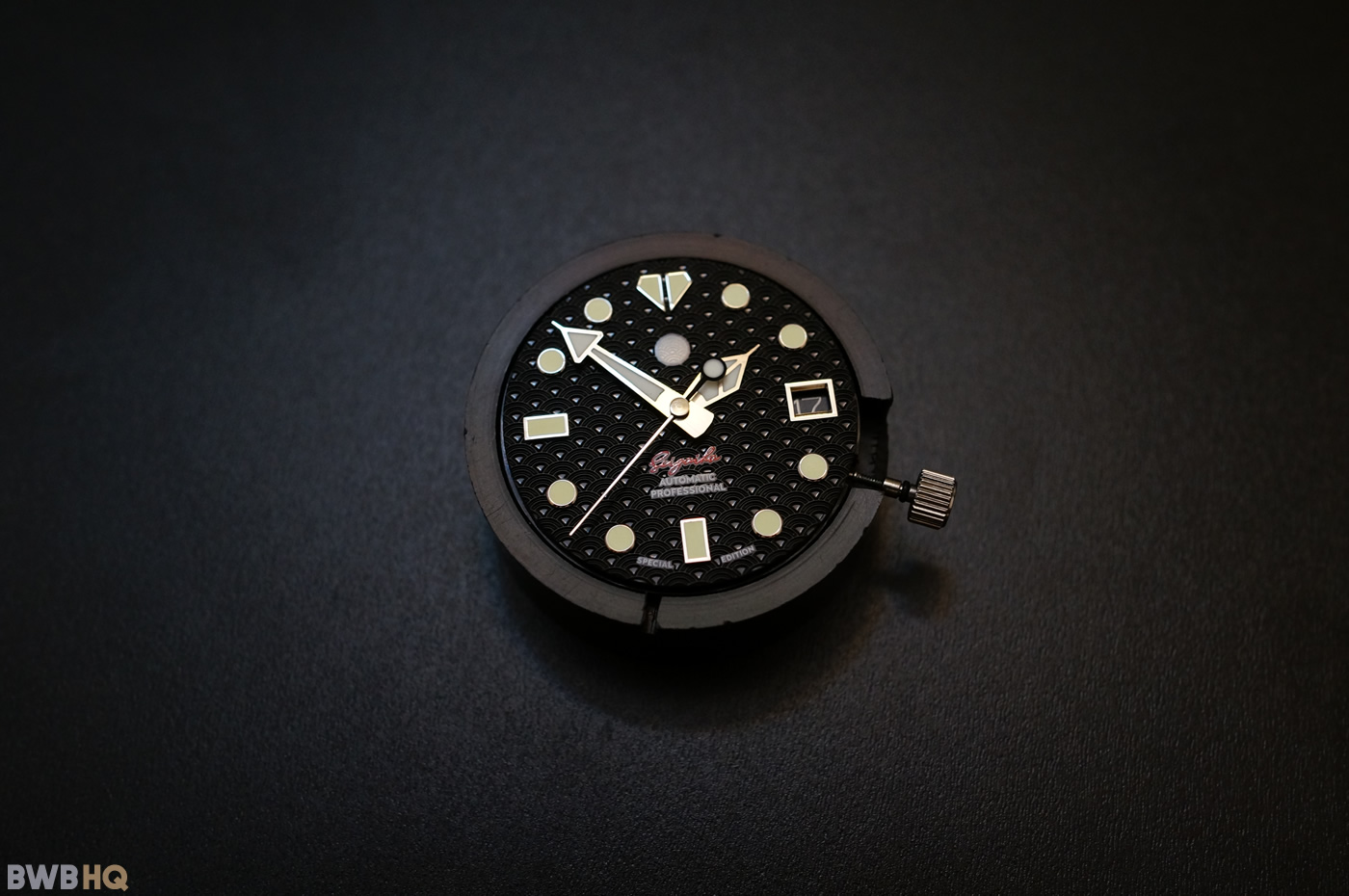 There’s 2 versions of the dial that you can choose from more specifically the Super-LumiNova lume, C3 (Mint Green) or the BGW9 (Neon Blue). I went with the C3 as I wanted maximum brightness. The minute markers are absent in this dial as compared to the first version as this is probably meant for modding with Seiko SKXs which has a chapter ring and would give it a cleaner look. While I preferred the overall look of the first version but I loved the red Seigaiha text that really pops in the second version. Also the 12 o’clock index seems to look like a split heart shape at first glance. All the indices are also applied which gives it a more premium look.

The wave pattern is beautiful in person with just the right size and is embossed to create a 3D look. Overall, the black glossy finished dial creates a visually pleasing play with light as you turn the watch in different angles. The red cursive Seigaiha text at the bottom provides some character to the dial and the remaining white text matches the color as the Komoworks logo at the top.

If I have to nitpick would be the date window at 3 o’clock. I found that it didn’t align perfectly in the center but could probably be fixed by bending the feet slightly. 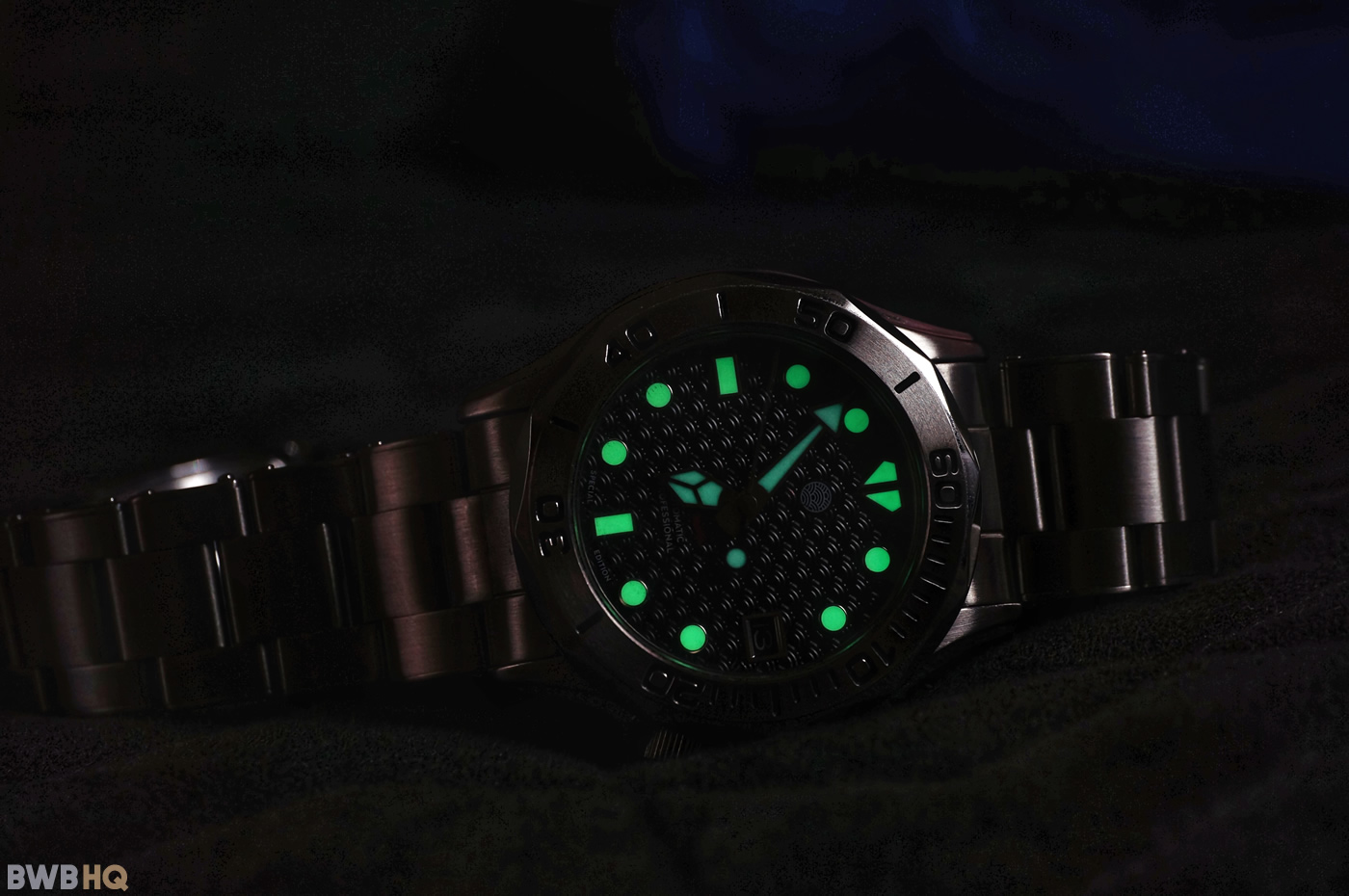 I have never really been pleased with the lume on aftermarket dials but the C3 Super-LumiNova lume on this glows like a torch. It just blows away the competition and I would say it’s on par with the lume on my Seiko SKX173. It glows in a bright green and will last for many hours.

The hands that I’ve paired with this dial is from WR Watches as that was the only place I found to supply these hands with a brushed finish. The lume on this is using C1 which is white in daylight and glows green at night but the lume is rather weak and pales in comparison with the dial. At first I thought the contrasting lume colors with the dial would look mismatched but luckily the white logo and text on the dial makes up for it. Another issue I had was with the seconds hand where it was made a bit too long and I needed to clip it slightly so it doesn’t touch the chapter ring. I have since found better alternatives that makes similar hands and might try it in future.

I have also paired this mod with a faux rivet bracelet I found from eBay which fitted perfectly with the Seiko SNK027. This particular bracelet which I found out later is not exactly suitable for smaller wrists. I had to do some serious modifications to it to fit a 6.1 inch wrist. So small wristed fellas, be warned. 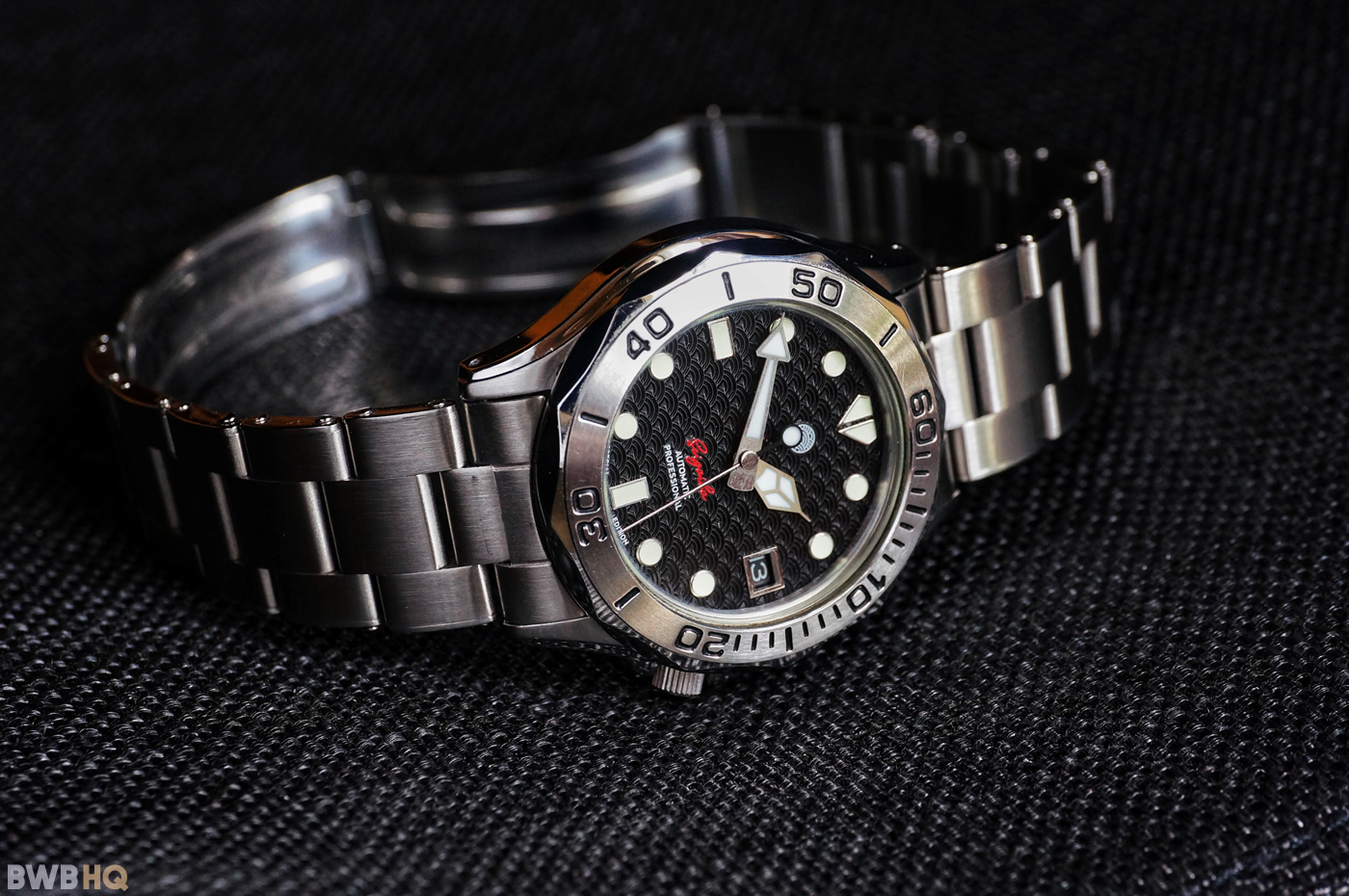 After some challenges, I’m pleased with this particular mod as I love the look of the Tudor Black Bay Steel. This mod sort of gives out a similar vibe, don’t you think? I have been waiting a long time for higher grade dials to appear and this dial from Komoworks does not disappoint. At the time of writing, another new dial pattern in white called the Asanoha is available for pre-order and if you’re looking for quality unique dials, check them out at komoworks.com. 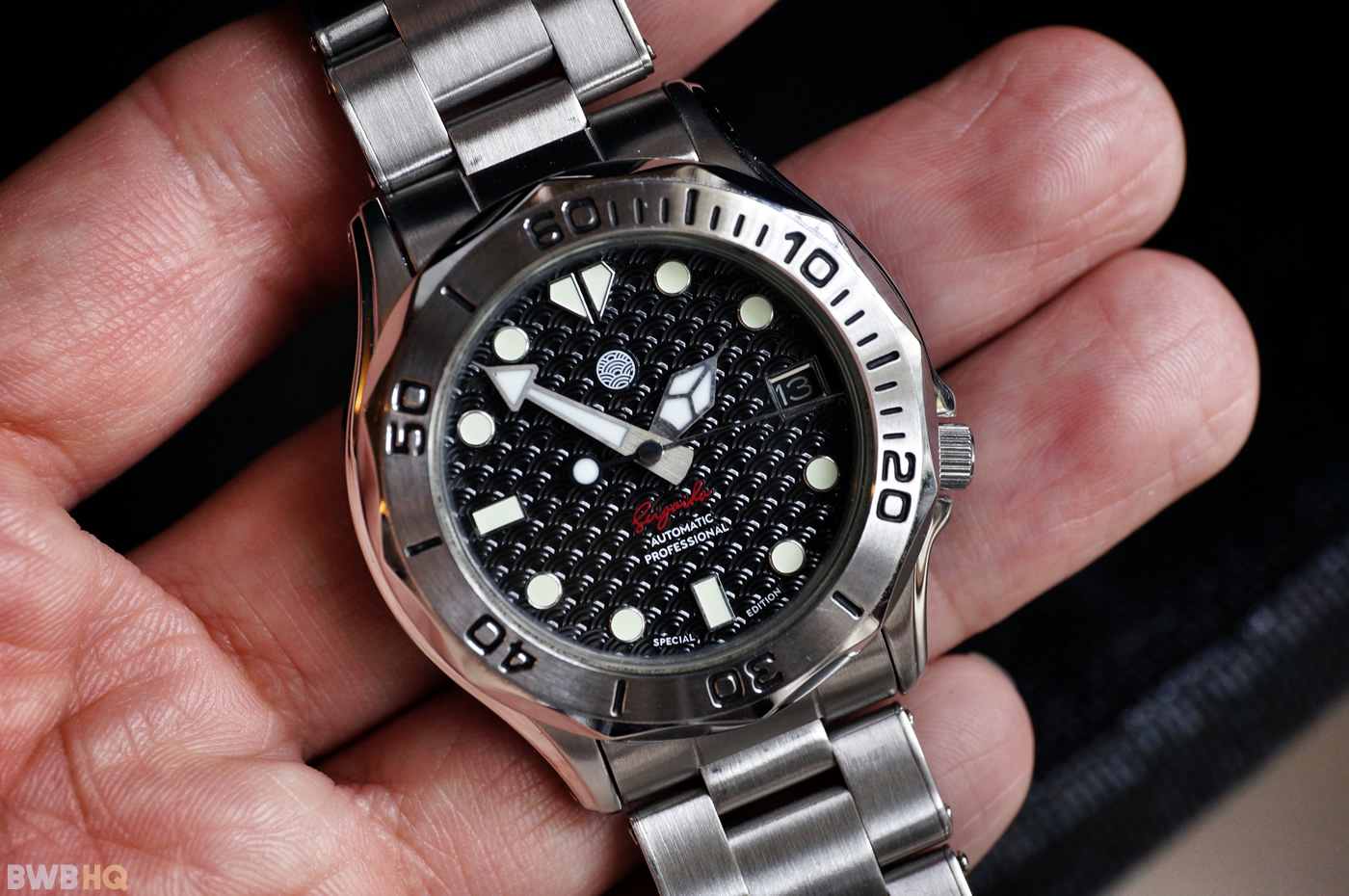 This is an overdue review of a mod that I did some time back. The Omega Seamaster Professional…

So after experimenting some mods with some Seiko watches(check back my previous posts if you haven’t), I thought…