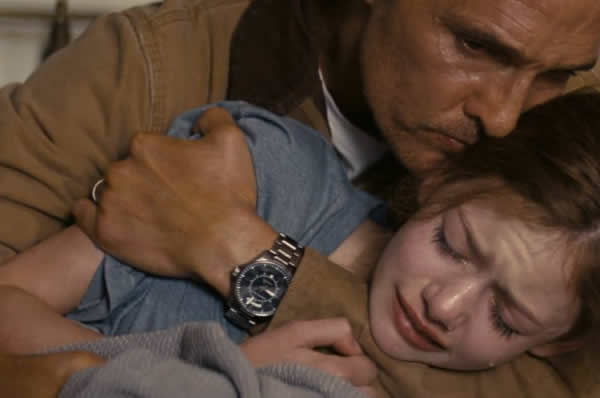 Talented actor Matthew McConaughey stars in Interstellar (2014) where he plays as Cooper. He leads a group of explorers to a newly discovered wormhole to surpass the limitations on human space travel and conquer the vast distances involved in an interstellar voyage to save humanity.

The movie was intriguing and I highly recommend it. It’s also pretty rare that we see so much screen time given to a watch which is a main character of the movie. Producers of Interstellar actually approached Hamilton to supply them with two watches and you see Matthew McConaughey wearing the Hamilton Khaki Pilot Day Date H64615135 on his wrist which is available in the current Hamilton’s watch collection. The Hamilton Khaki Pilot Day Date has a 42mm stainless steel case with matching stainless steel bracelet just like the one in the movie. It comes in a black dial with silver-tone hands and stick hour markers which is luminescent. Date display is at 6 o’clock position while day of the week is displayed at the 12 o’clock position. It’s using a Swiss ETA 2834-2 automatic movement that comes with 38 hours power reserve. Lug width is 20mm for those looking to change the strap and it’s also water resistant to 100 meters. The second watch also known as the ‘Murph Watch’ which is worn by Murph (Murphy) Cooper played by young Mackenzie Foy and later by Jessica Chastain. This watch plays an important role in the movie (spoilers ahead) where her dad communicates to her with Morse code via the seconds hand on the watch. This is a custom made watch just for the movie which is not available commercially. It’s a modified Hamilton Khaki Automatic. It comes in a 42mm stainless steel case with a black leather band and white stitching. This one is unique in the sense that it doesn’t have a Date window on the dial where all Hamilton Khakis actually does. The hands look very similar to the Hamilton Khaki Team Earth where it has a vintage looking lume.

This one is not for sale but if you’re interested in the Hamilton Khaki Pilot Day Date, it’s retailing for $945 but you can get it for $708 at Amazon. Check out the wrist watch movie shots and the movie trailer below:-