So previously I wrote about how I modded the Seiko SRP269J1 to a black tactical looking watch but never really reviewed about the watch itself. So as I explained in that post, I was looking for a watch with a nice dial and case that could make for a potentially good DLC mod. When I stumbled upon this Seiko SRP269J1, the big arabic numerals and that very nice big crown instantly drew me to it. I did not manage to see the original watch in person as I sent it directly to be modded. This model ending with J1 means that it’s a Japan made model which means the quality should be better than the K1 ones.

The case size was perfect and not overly large at 39.5mm in diameter and with a nice lug to lug distance what will not overhang on my slim wrist. I gave up looking for a black tactical watch that would fit my wrist and ticks most of my requirements checklist. The original case had a high polish bezel and with some brushed surfaces around the case. The crown was another big deciding factor. It was large and really nice to handwind especially when the watch is on the wrist. You could just stick your index finger underneath the crown and just wind it with ease. Too bad it’s not signed but as with most Seiko 5 Sports range it’s normally not.

The dial looks sporty with the raised silver Seiko 5 emblem and the red Sports text. Some people don’t like it but for me I’m digging it. Raised logos does make it a bit more sophisticated than just a normal boring printed text. Also the nice red lollipop seconds hand adds to the sportiness. The white syringe hour and minute hands makes it very readable against the jet black dial and gives it a more tool watch aesthetic. The day and date complication at 3 o’clock does make it very useful in my work where I do need to check it frequently throughout the day but it does affect the balance of the dial. Right above the 6 o’clock you have white text for Automatic, 24 Jewels and 100M.

The arabic numerals are nice with the numbers 12 and 6 larger than the rest. The numerals are not lumed but there are round lume dots at every 5 minute interval and for the 12, 3, 6 and 9 o’clock position the round lume dots are contained inside a square white box. The hands are also lumed with LumiBrite which glows pretty well surprisingly but don’t expect SKX diver-like brightness. There’s also a 24 hour marker chapter ring which adds to the utilitarian military look. Overall the dial looks just right without being too busy or too blank. 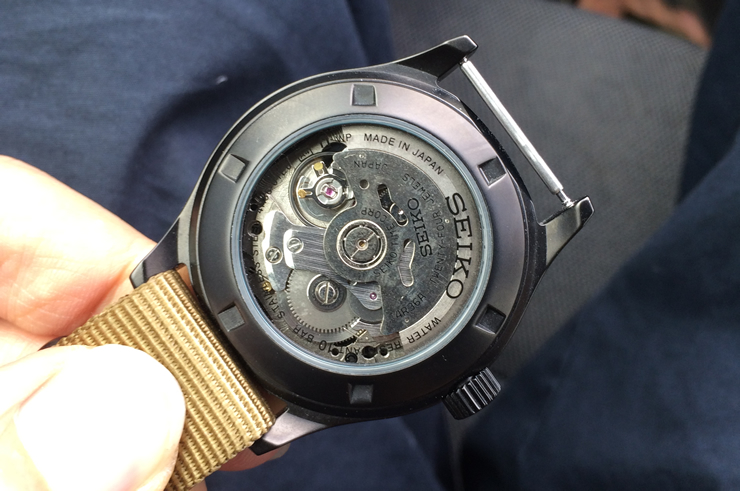 Right at the back is the see-through caseback that houses the 4R36A calibre movement. It’s a rather new movement introduced in mid 2011. This is a 24 jewel automatic movement that has hacking and hand-winding features. After owning the SKX173 for a while which has the 7S26 movement, I felt that the 4R36 movement runs rather similarly. The biggest difference are those just mentioned hacking and hand-winding addition. However since it’s easier to hand-wind it daily to keep it fully wound, it can be perceived that this gives better precision since it’s harder for the 7S26 to be fully wound unless you are really active throughout the day. I expect this to be a reliable workhorse just like the 7S26. So I found that if the watch is around 75% or more wound, I could get around -5 seconds per day while any lower it will deviate between -10 to -20 seconds. The 4R36 should have a power reserve of 40 hours and beats at 21,600 beats per hour (bph).

This watch comes with a rather nice stainless steel bracelet but with hollow end links. Since I did not DLC mod the bracelet, I guess it’s irrelevant for this review. The case lugs also comes with handy drilled lug holes to make those strap changing much easier. The 20mm lug width means that this is a strap monster and this is where the PVD buckles I bought earlier will come in handy to match the DLC coat.

Overall, I’m pretty satisfied with this watch as it’s an ideal size and has that military tool watch aesthetic which I like. Based on the watch strap that I use, it could also have the classy sporty look. So it’s a rather versatile watch as well. Also it was nice to try out the different movements by Seiko and the 4R36 is definitely a step up from the 7S26. What do you guys think? 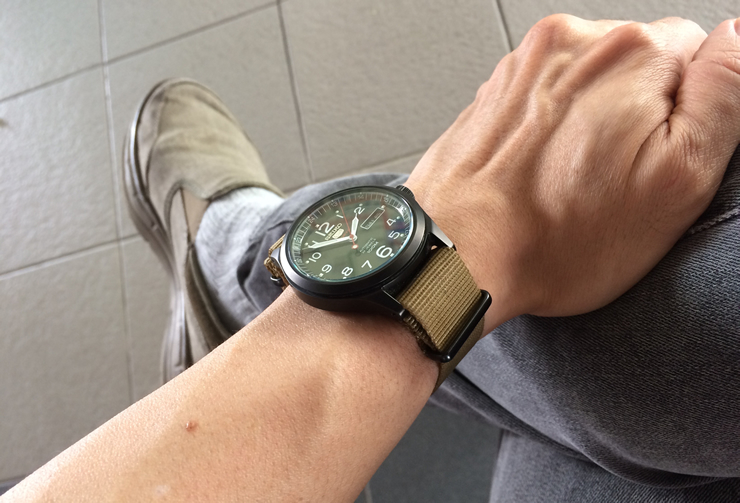