Nowadays when we talk about Casio, we almost always refer to the tougher G-Shock range. However this Japanese company which created its first digital quartz watch namely the Casiotron in 1974 has continued to innovate over the years. The ’80s and maybe even early ’90s was a time of funky retro style and the popular A168W which is a cousin of the equally popular A158W both share the same DNA from the legendary Casio F-91W.

Tracking down the production date of these models seem to be quite a challenge with the only help from this Casio catalogue from 1984. The A152 looks to be the predecessor of the A158W and we can only assume that both the A158W and A168W could’ve been released around the late 1980s or in the 1990s. Also the A168W which retains that retro style seems set to have a prominent screen time in Wonder Woman 1984.

For a watch to be still in production and still looking relatively the same after nearly three decades only shows how popular it is. While I personally do like the retro look of both the A158W and A168W but it was the recent release right around September 2019 which caught my eye. It’s a variation of the slightly thicker A168W in a more monochromatic color scheme. Coming in both a negative (A168WGG-1B) and positive (A168WGG-1A) display, it definitely piqued my interest. 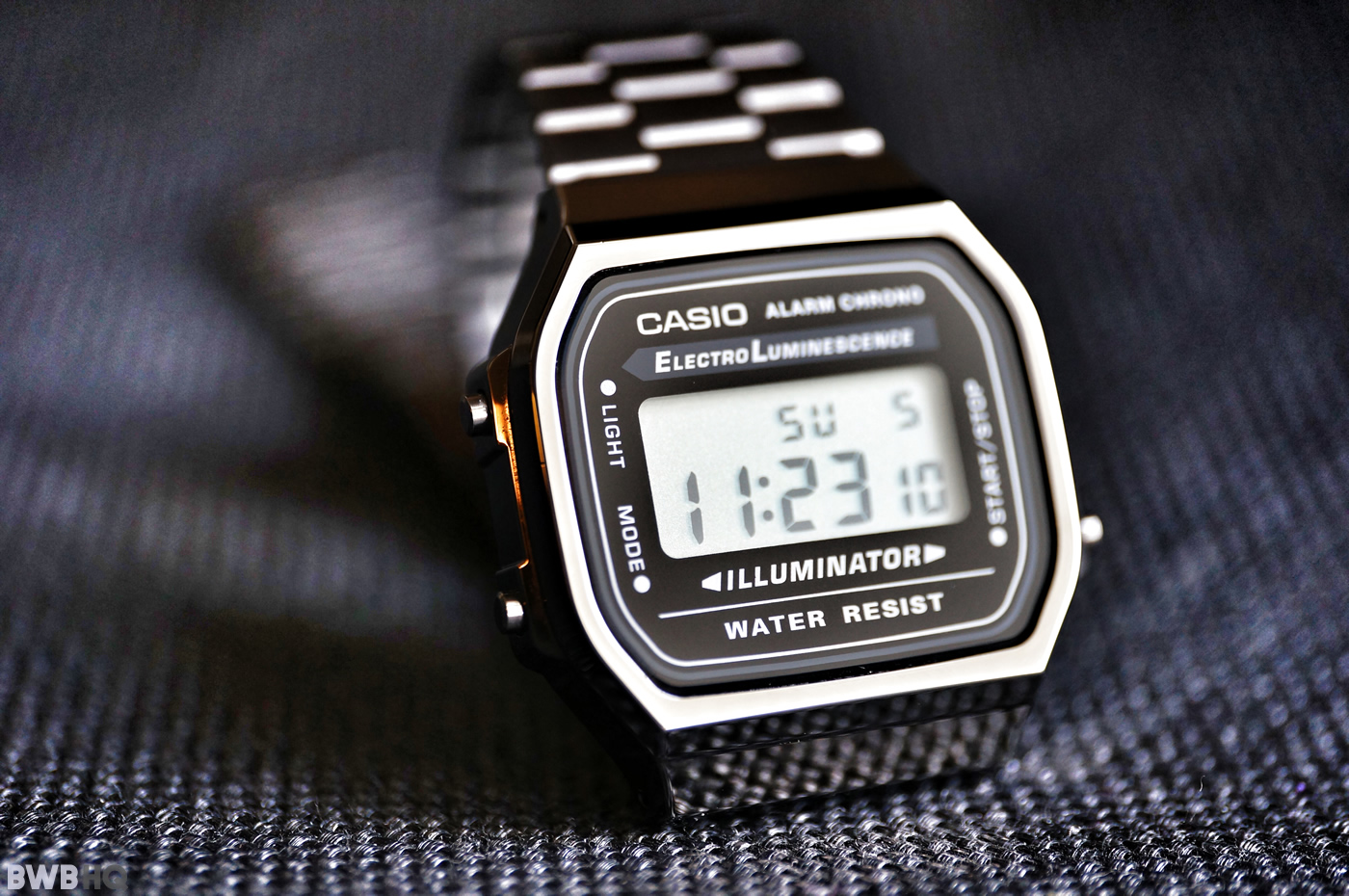 Is that zaratsu polishing I’m seeing?

So what makes this sub-$50 watch any special? Well, it’s definitely a nice change from the fun colorful style of the original and that gunmetal finish is just compelling. This release was rather low-key and I only had Casio’s product images to make a sound judgement. Most of the time what you see on the website can vary quite differently in person. I picked the positive display having experienced how difficult it can be to read the negative display version in darker settings. The positive display also in my opinion maintains that cool retro vibe.

Luckily the watch didn’t disappoint. Coming in a svelte 36.3mm in size, the watch does feel small in my initial impression. Inheriting pretty much almost everything from the A168WA-1, the case is made of plastic and is chrome plated while the caseback is stainless steel. Compared with the silver tone, this gunmetal finish exudes a very classy look. One issue though is that it’s a fingerprint magnet. I’m not sure if the LCD display matte gray background color is any different from the original but it blends in so well with the homogeneous color scheme of the watch. I appreciate that this watch only has 3 buttons with the top right vacant. If you wear the watch on your left wrist, this makes adjusting the watch so much easier without accidentally pressing the button. 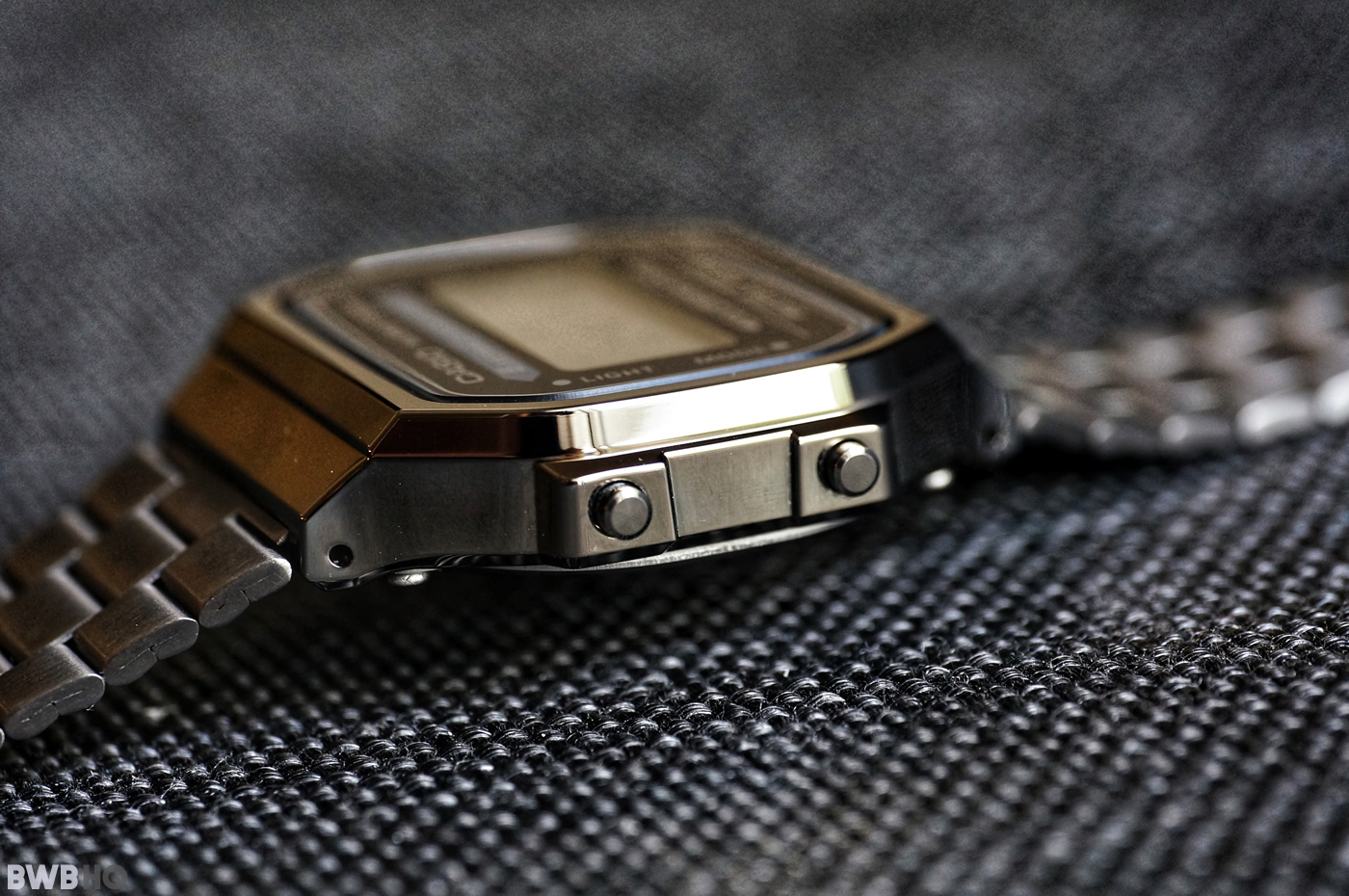 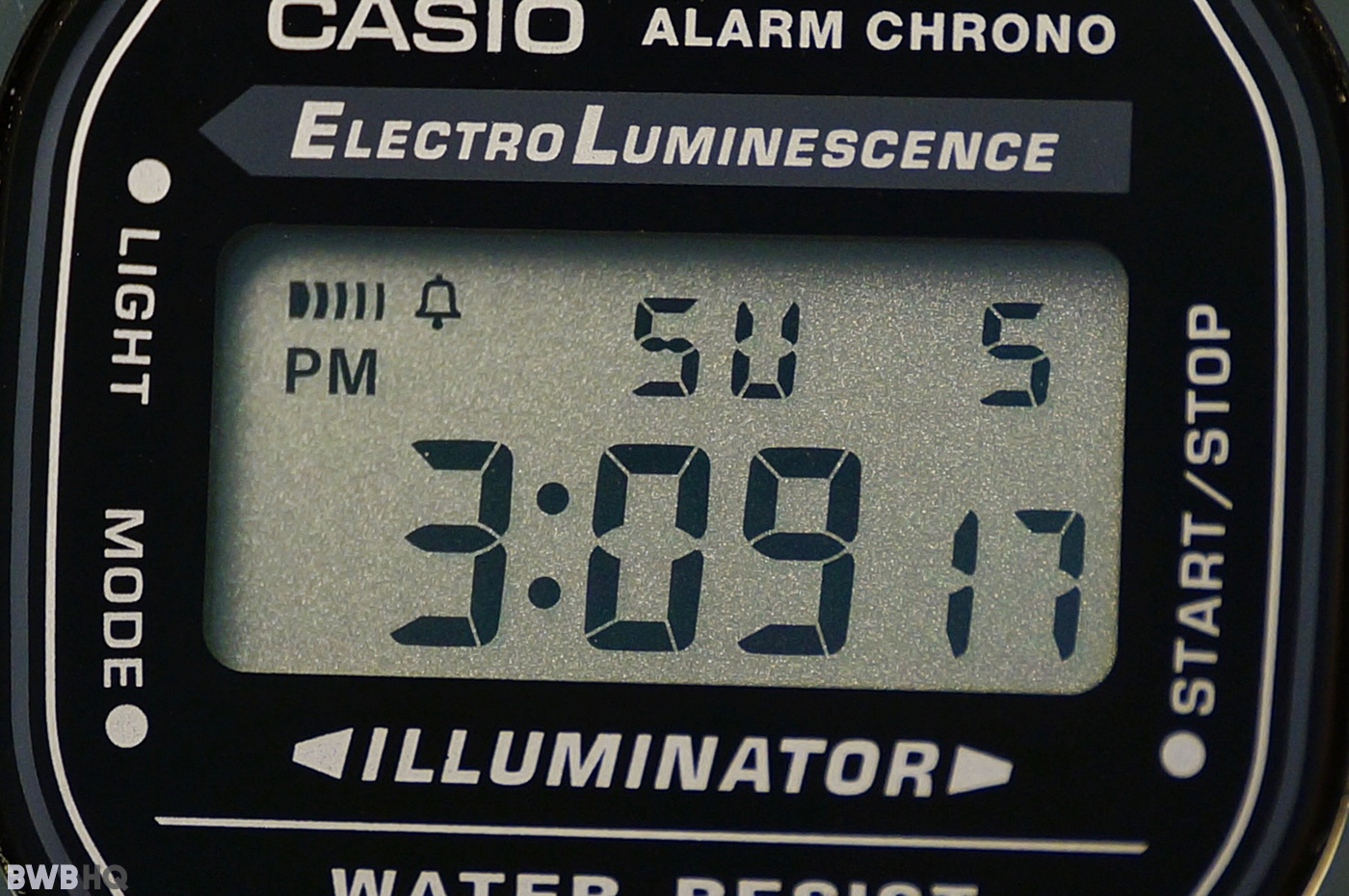 The watch itself does its job well which is to tell you the essential information. Yes it looks busy with a lot of text but there’s no distracting colors that prevents you from focusing easily. Also I like this module for just having the day and date information minus the month as depending from where you’re from, sometimes it takes a little bit more processing to gather which side is the actual date.

Under the hood, you get one of the most basic Casio modules which is the 3298 module. The A168WGG-1A comes with a stopwatch, daily alarm, hourly time signal and auto-calendar. It’s not a perpetual calendar, which means you’ll need to set the date once every four years after February. This year happens to be one of it. The watch is rated to be accurate up to +-30 seconds per month and in my testing I was averaging around -20 seconds. So it’s within the specifications. As boring as the features sound, sometimes I appreciate the simplicity of changing the settings without having to lookup a thick manual. With no depth rating specified other than just water resist, this normally means it’s splash proof or 30 meters water resistance. I have seen the A158W take a beating by someone I know who’s an occasional surfer and it came out unscathed. I expect this to be as durable but with no guarantees as it’s just not made as the same specifications as its G-Shock sibling. Also I love the fact that this module will not require a battery change for 7 years. 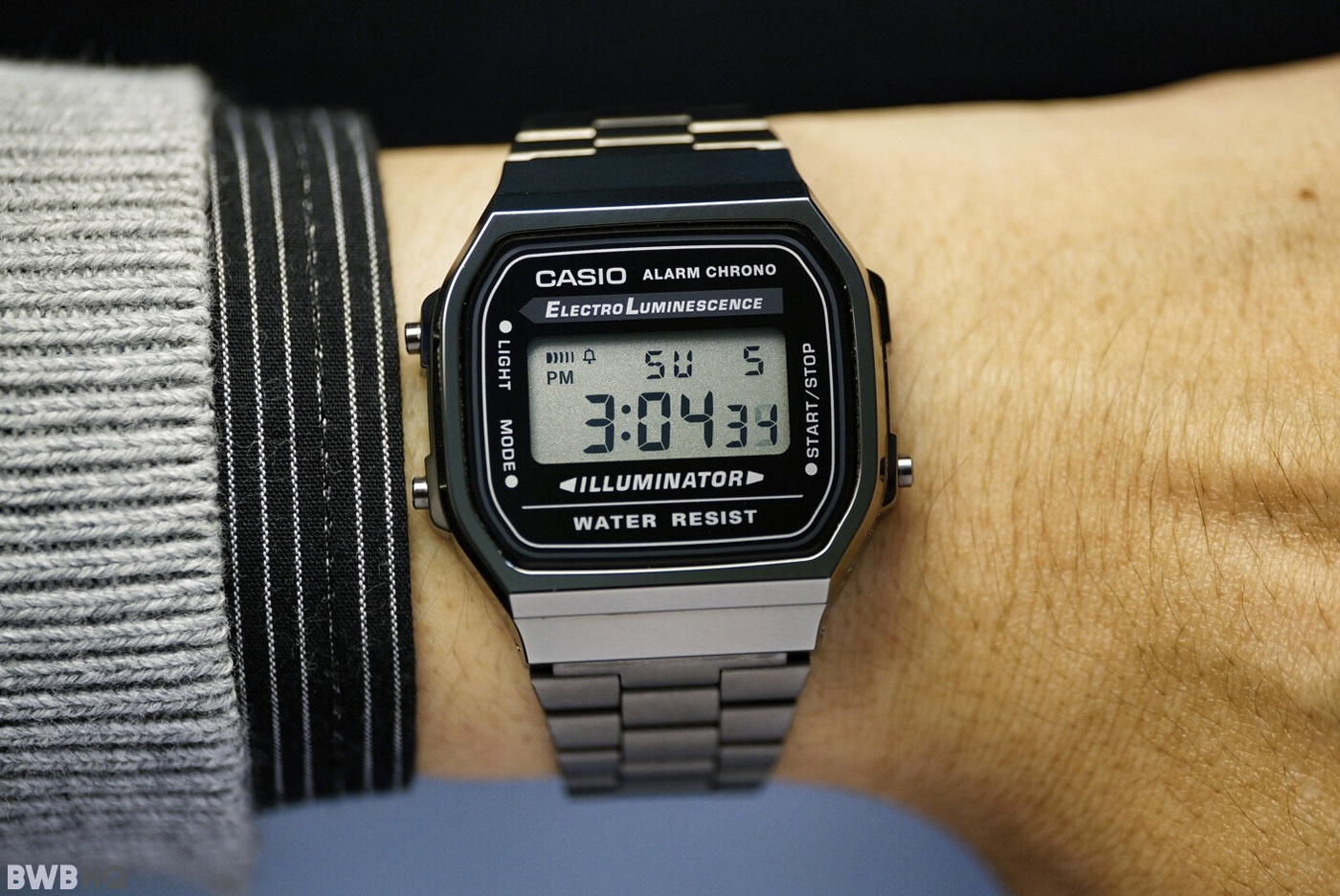 Fun fact, hold the bottom right button to see the word CASIO appear and hold all the buttons to check if the digital display is in working condition. This used to be a way to check if the watch was original but fakes has managed to replicate this button behavior. 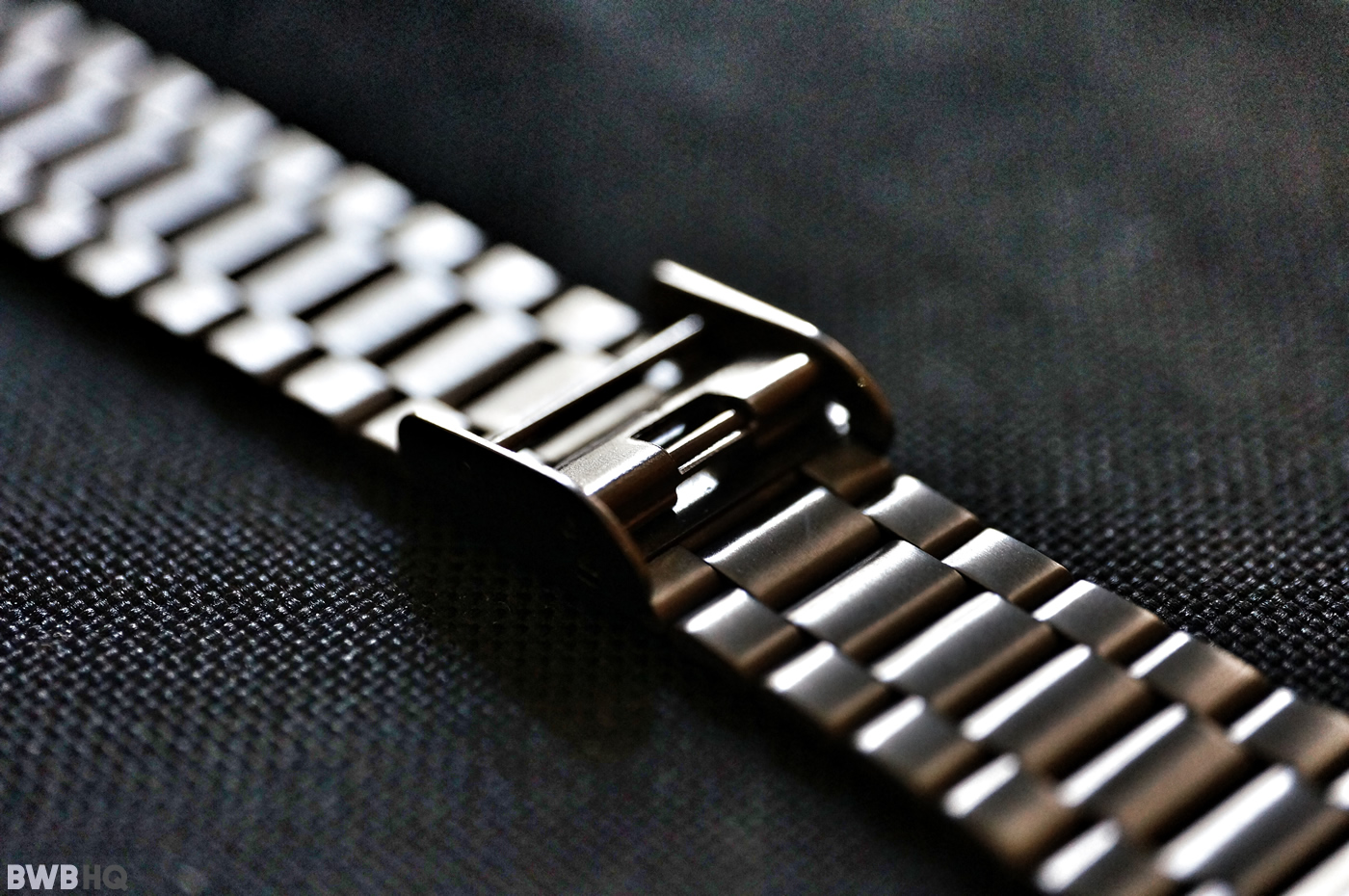 The strap is a simple three-piece link design that tapers elegantly from 21mm all the way to 15mm. It’s stainless steel that’s gray ion plated with folded links and features a clip over and snap kind of clasp. The sliding receiver which requires just a simple tool to nudge, makes it easy to adjust to the desired length. There’s drilled lugs to easily swap out the bracelet with some other strap but the default integrates so nicely that you’ll probably skip that idea.

Weighing in at just 49g, you won’t feel it on the wrist. The watch and strap is comfortable to wear and the size is perfect on my 6.1 inch wrist. Some actually preferred the A158W because of its thinner profile but the A168W which is just 1.4mm thicker is still very slender and would definitely fit under the cuff. What made me interested in this watch was just how versatile it is. From smart casual and even to the board rooms, this watch can fit most scenarios. Also the bluish green EL backlight is a cool handy feature to have at night. 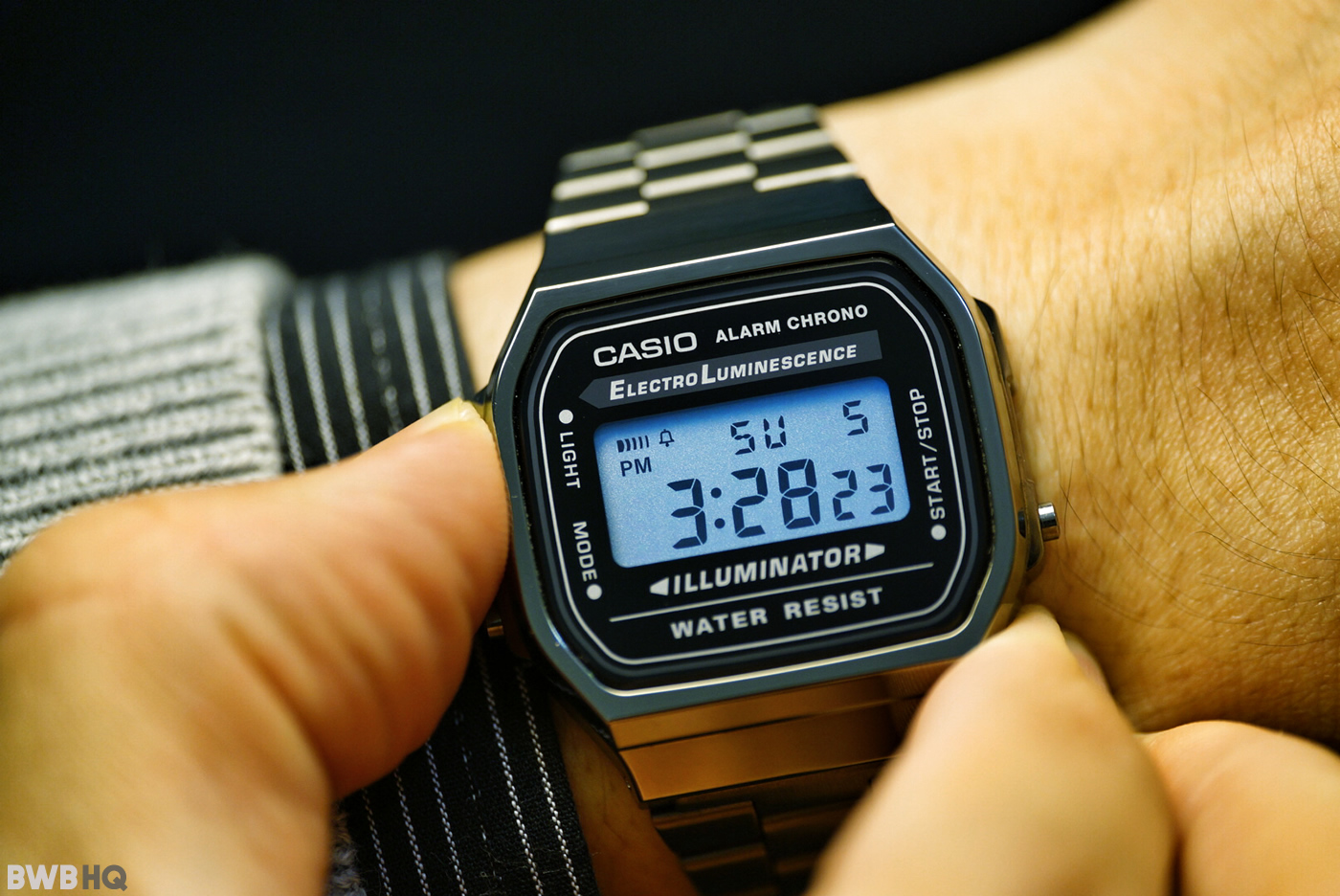 At just around $40, it’s pretty insane what the A168WGG-1A offers as compared with fashion watches. Yes it’s a quartz and it handles like a cheaper watch but on the other hand it’s a fun little watch that looks a million dollars. I find this can add some additional flavor to any mechanical watch collection and most importantly when you strap this on, you’ll most likely get a nod of approval from true watch enthusiasts. 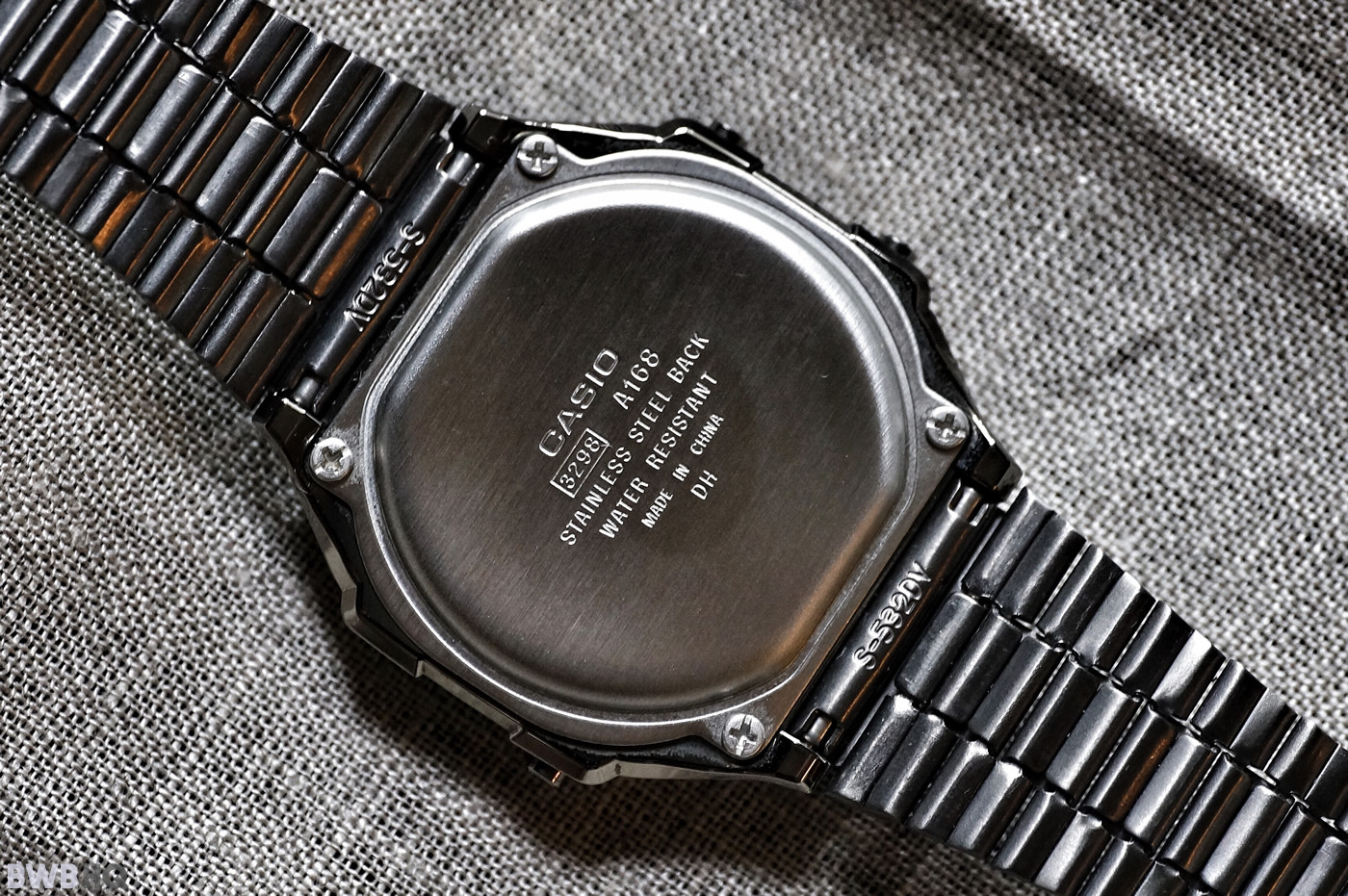 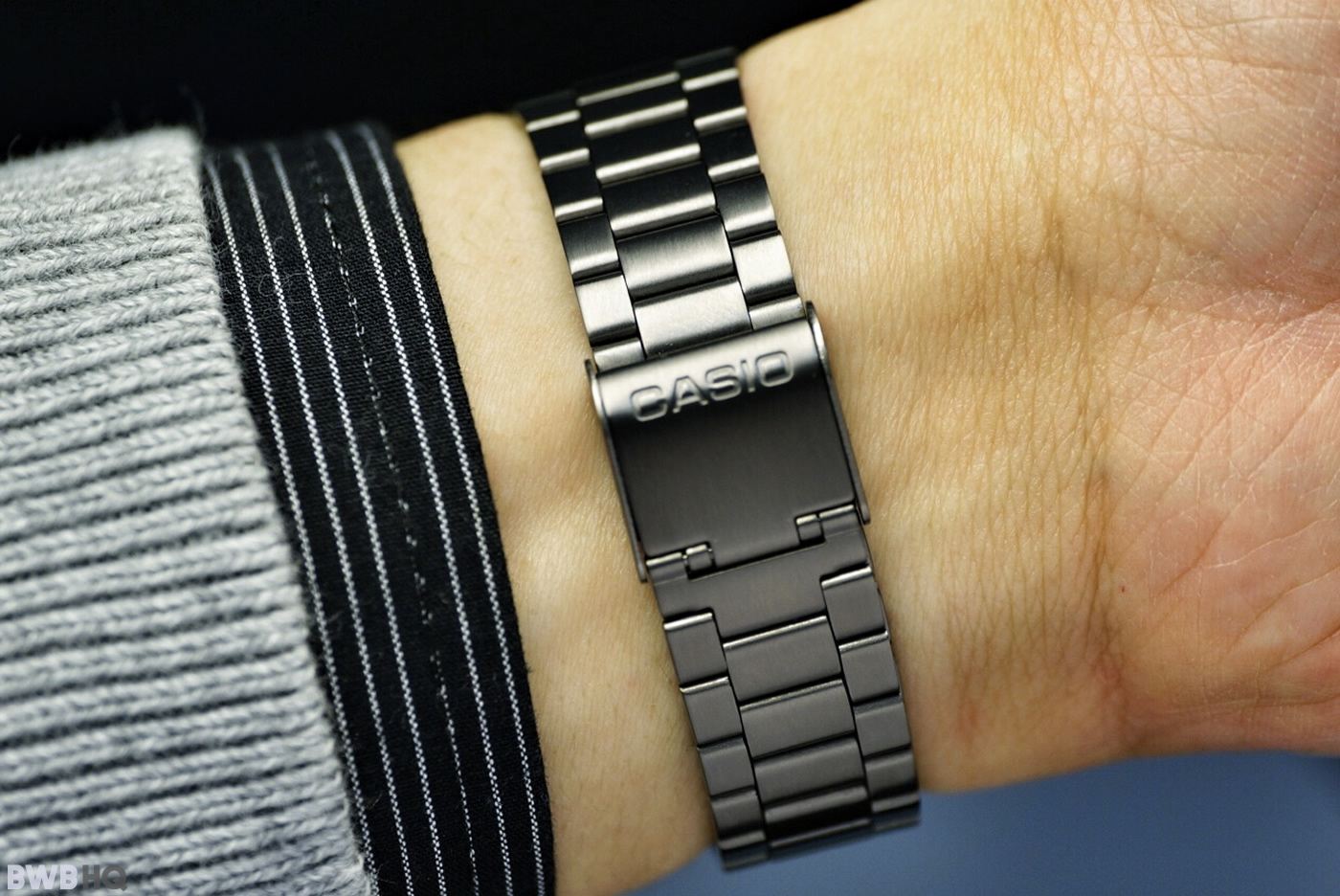