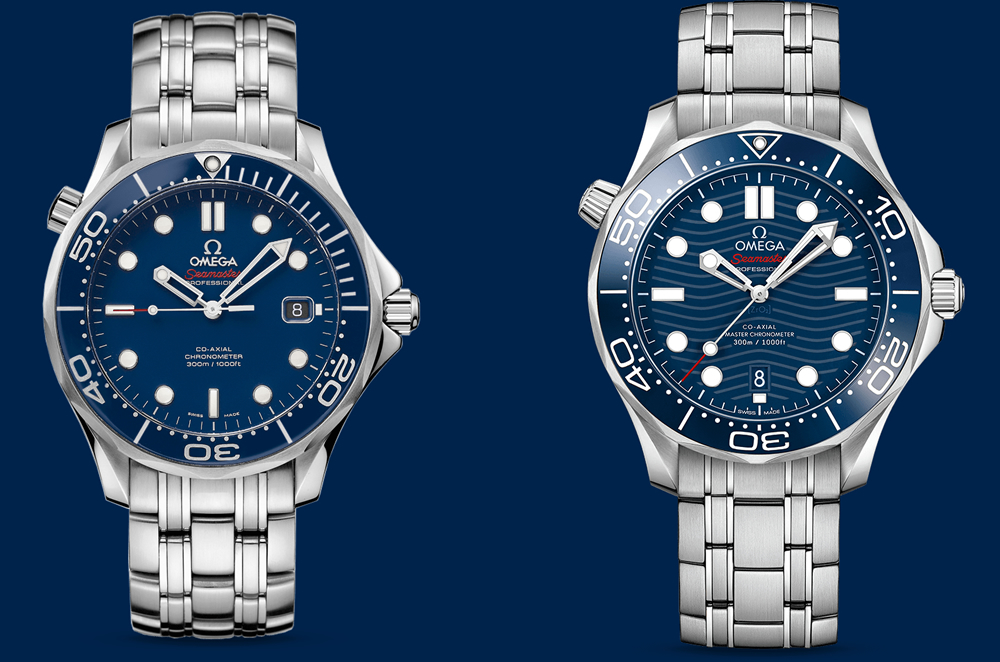 With the new 2018 Omega Seamaster Diver 300M model being announced in Baselworld 2018, the watch community is abuzz again with this long-standing Seamaster product line. The Seamaster Diver 300M, a watch produced since 1993 first made an appearance in the 1995 James Bond’s movie GoldenEye continues to share the same design DNA till today. 2018 will mark the 25th year anniversary of this much beloved and popular Seamaster but over the years numerous variations have been produced and to make a decision on which particular model to get can be rather challenging. A personal grail of mine as well, I have compiled a list of my personal dilemmas and questions faced which could also be what first-time Seamaster buyers are facing. These are of course my personal opinions and you should definitely go with what sings to you.

It’s always hard to resist the latest releases especially when there’s new specifications introduced. For 2018’s Seamaster, you have the reintroduced laser-engraved wave pattern and better balanced dial that has the date shifted to 6 o’clock. The Master Chronometer Calibre 8800 movement is now fully in-house and is resistant to magnetic fields reaching 15,000 gauss. It also comes with 55 hours power reserve. The new range is attractive but a lot are comparing it with the now previous ceramic model introduced in 2012. The new 2018 model’s increased case size of 42mm has already put off a lot of potential buyers. Toothpaste cap like helium escape valve, busy dial and printed instead of raised Omega logo are among other complaints. There’s a certain charm with the older 2012 model without the waves that gives it a more premium look. Having said that, the 2018 model’s finishing and incredible movement makes it a serious contender with the Rolex Submariner. Personally, the size alone of the 2018 model has deterred me from considering it but I still find the new models very bold and interesting especially the Steel – Sedna gold version. I would also consider the beautiful blue version if they made a smaller size.

While ceramic is the latest with that glossy finishing and scratch resistance surface, some may prefer the aging that comes with aluminum inserts. Vintage pieces with naturally faded bezels like the Rolex Pepsi GMT are highly sought after but I find the grey ‘ghost’ bezel of vintage Rolex Submariners like the reference 5513 the most appealing. Ceramic bezel inserts tend to chip but will continue to look new over the years while aluminum inserts scratches easily but will age beautifully. If you prefer a watch that will continue to look pristine over the years, get the ceramic version.

Since 1993, there’s mainly 2 choices of case sizes (thank you Omega!) and I’m referring to the marketed male versions, the 36mm is better known as the midsize (sometimes sadly they call this the boys version) and the 41mm and now 42mm full size version. There’s also the 28mm which is more for the ladies. When you first look at the 36mm like I did, most would be surprised at how small the midsize is like in person. Most watches with a bezel insert does make the watch smaller than it should. However over the years I have learnt that big is not always better. Get a watch size that is in scale with your wrist size is normally what I advocate nowadays. I personally think that if your wrist size is smaller than 6.3 inches, get the midsize 36mm while the larger wrist sizes can go for the full size. If Prince William can pull off wearing a midsize, I think it shouldn’t be an issue with a lot of people. Another reason to get the midsize is that it’s more versatile where it can be a combo sports watch and a classy dress watch depending on your strap. Big bulky watches generally don’t really do well as dress watches.

Also getting one in scale with your wrist makes Instagram wrist shots so much easier. You don’t have to only shoot in angles and distances where the watch does not look too big on the wrist especially where the lugs seem to overhang. However if you want presence on your wrist, definitely go for the larger size as the midsize does look minute from a distance. I wonder if Omega would release a smaller midsize version in the following years and a 37-38mm size would be a perfect size for smaller wrists.

The wave dial has been a signature of the Omega Seamaster Professional and made even more famous by Pierce Brosnan himself. So when the first ceramic version came out without the wave pattern, some were disappointed while some really loved it. I think the wave pattern gives it a more vintage vibe except for the 2018 model which looks more modern. So for older models, if you like that vintage vibe go for the wave dial while if you want more everlasting design, go for that glossy lacquered dial. It gives it a classy look and I love how the light plays with it at different angles.

The 2018 model has up to 14 variations to choose from but a common dilemma and probably the hardest to decide was with the 2012 ceramic blue vs black color. If I were to decide from even earlier generations with the aluminum bezel insert that has the wave dial, I would probably go for the blue color. With the 2012 ceramic version, both colors show very different results in various lighting. The blue is a lighter shade in good lighting conditions while in darker conditions, the blue turns to almost black in color. The shade of blue gives it a trendier and sportier look. The black on the other hand is deep and in some lighting conditions shows a hint of dark blue. Both colors are equally popular. If you want the best of both worlds, get the blue while if you want a more classy look go for the black.

Watch enthusiasts would definitely go for the mechanical version but if you don’t care about that or if price was a concern, you can also consider the quartz version. I believe the 2012 ceramic versions do not come with quartz movements and only the wave dial with aluminum bezel insert during the same era has that offering like this model reference 212.30.41.61.01.001. In GoldenEye, Pierece Brosnan wore the earlier versions of the quartz with the reference 2541.80.00.

Which Movement: Pre Co-Axial vs Co-Axial?

The movement in the Seamaster 300M has undergone various transitions from the Omega calibre 1120 to the Co-Axial calibre 2500. The Co-Axial movement was a big thing for Omega having using the Co-Axial escapement from the late British watchmaker George Daniels. The calibre 2500 was a modified ETA 2892 and there were few iterations from the 2500A, 2500B, 2500C and then ended with the 2500D. The earlier versions were reported to have issues and was finally fixed in the 2500C and 2500D. For peace of mind, the year 2012 ceramic models onwards uses the latest Calibre 2500D versions. With the latest 2018 model, it now uses the fully in-house Calibre 8800 movement. I guess the only thing to note are those issues reported in the calibre 2500A and 2500B while with any new movement in the market, only time will tell whether it’s as reliable as it sounds.

With any new releases, generally the price will be at the highest before it steadily goes downward and then stabilizes at a certain level (except for Rolex!). The latest 2018 Seamaster Diver 300M model retails at $4400 and the previous 2012 model can now be had for around $3000 brand new at an AD after discounts. If you look at the pre-owned market, the watch varies between $2000 to $2500 depending on condition and model. So I would say that the previous 2012 ceramic version does offer a lot for the price that it can be had now. Getting a new one also comes with a 5 year warranty while with pre-owned, it’s better to get it from a reputable and trusted seller.

I apologize if this article has been rather confusing jumping around between models as that was precisely my thoughts when looking to own my first modern Seamaster. Do you share the same dilemma? Let me know in the comments what other head cracking decisions you had with the Omega Seamaster Professional. Does this hint that a new purchase is on its way? I think it’s quite obvious by now that I’m leaning more towards the outgoing 2012 ceramic model. Let the hunt begin.