The Casio G-Shock needs not much introduction as an iconic piece out of the Casio’s wide-ranging stable. We as watch collectors might ogle and marvel at the balance wheel rotating back and forth, and how it gives life to a mechanical watch but sometimes we just want a simple beater watch to pick-up for mowing the lawn or to the more extreme go skydiving with. Debuted in 1983 after 2 years of development, Kikuo Ibe the inventor had the triple 10 rule in mind. 10-year battery life, water resistance to 10 bar and to withstand falls of up to 10 meters. The very first Casio G-Shock DW-5000C was born.

36 years has since passed and with more than a 100 million units shipped, we have seen the G-Shock becoming a cult icon with new advances like solar power, multi-band radio receiver, GPS, and Bluetooth connectivity making them far more functional than they used to be. However today we are looking at one of their most affordable basic lineup, the popular all-black G-Shock DW-5600BB. 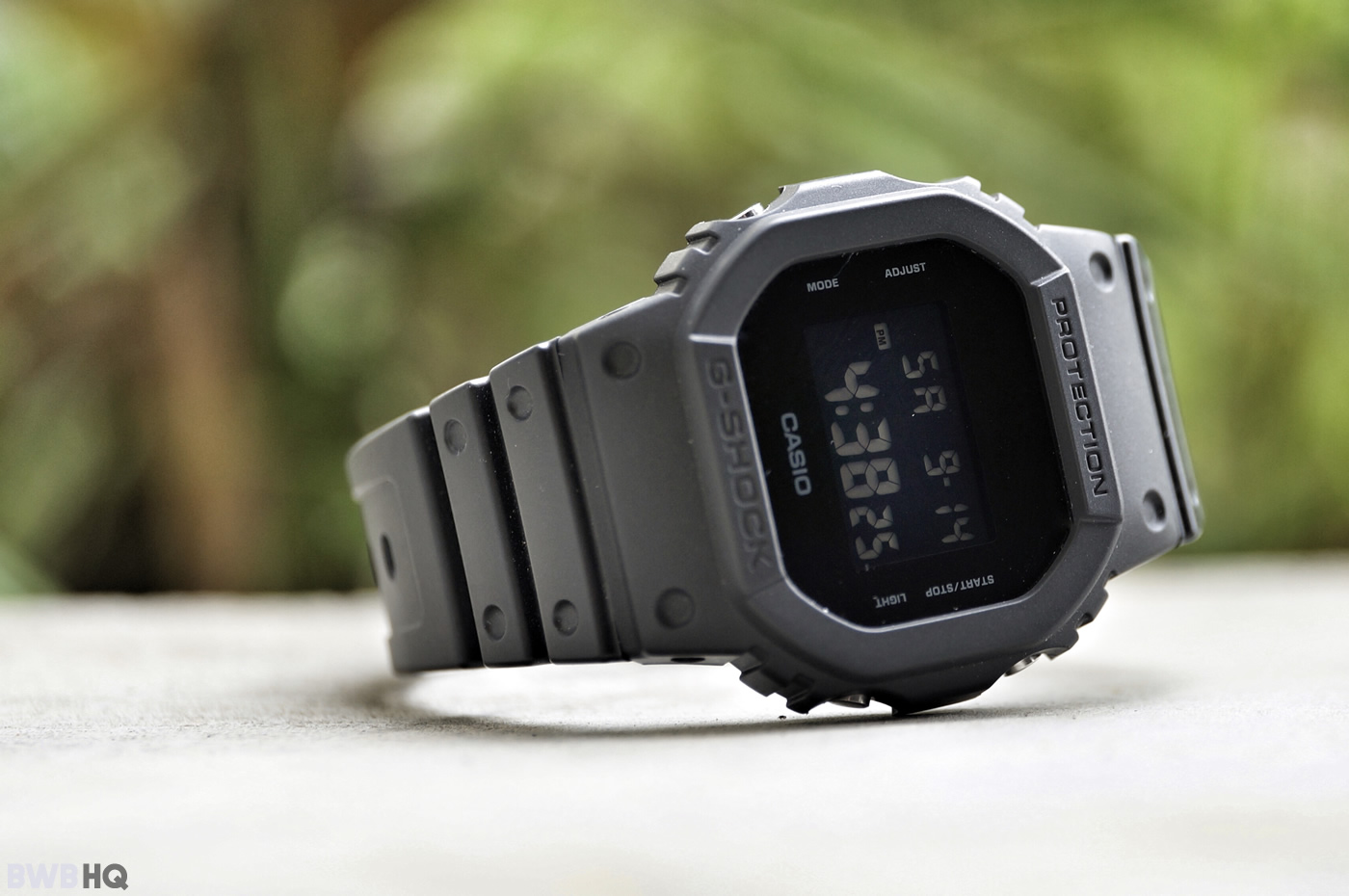 The case is made up of resin plastic with that matte black finishing that you will typically see for this square face design. It’s designed with toughness in mind where the protruded bezel inscribed with the stealth ‘G-SHOCK’ and ‘PROTECTION’ lettering protects the mineral crystal and the case sides actually help keep the buttons from accidental knocks at any angle. While resin is used for the construction of the case including the internal module, the watch does feel sturdy and does not give you the impression that it’ll break anytime soon. The caseback has a stamped metal plate that is screwed on with 4 Phillips screws that provides the impressive 200 meters water resistance.

As compared with G-Shocks which has a screw-back, the entire inner case needs to be made of stainless steel. While this does not make it any less durable but the cheaper plastic has an elasticity that just absorbs shocks better. 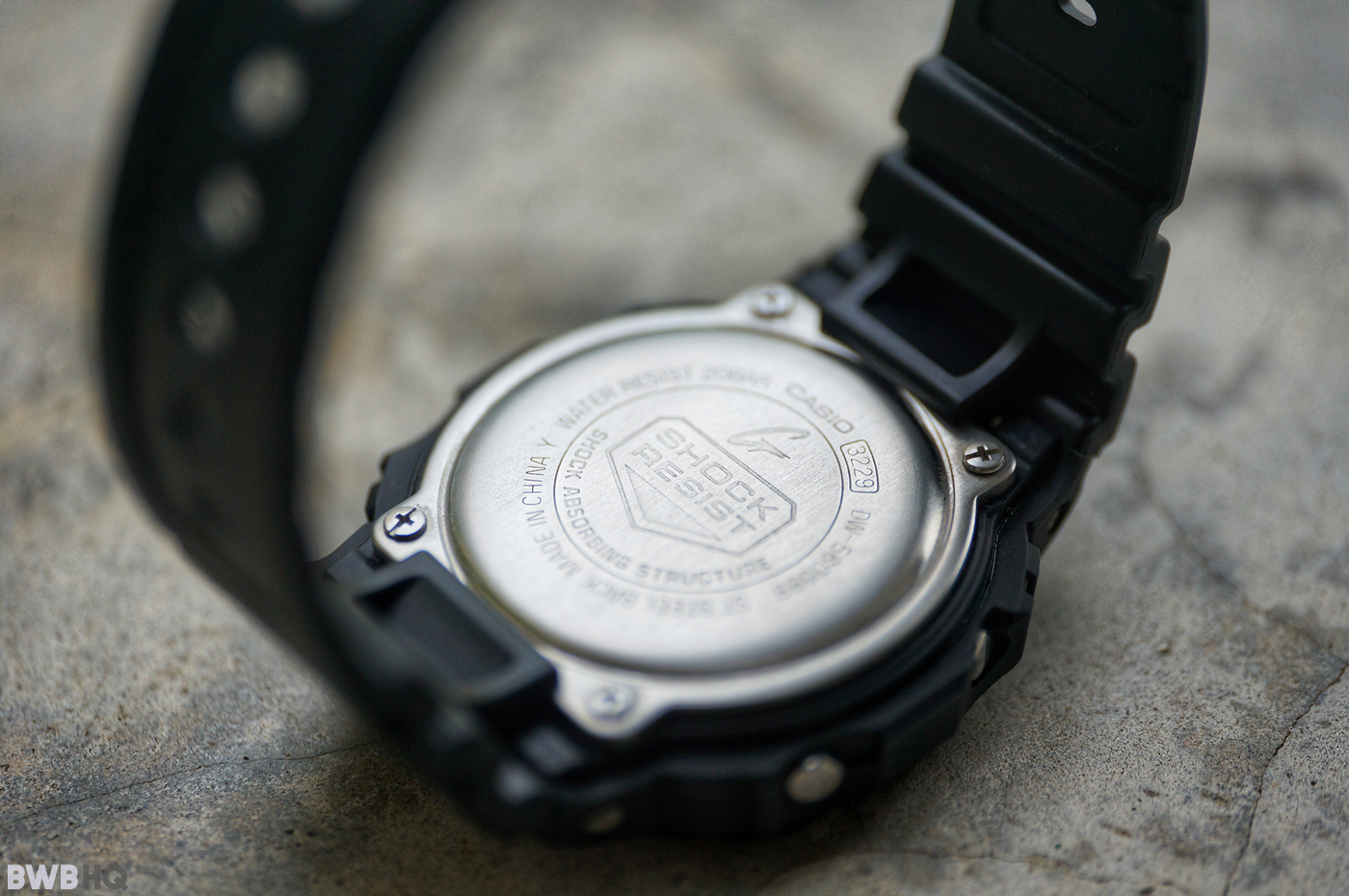 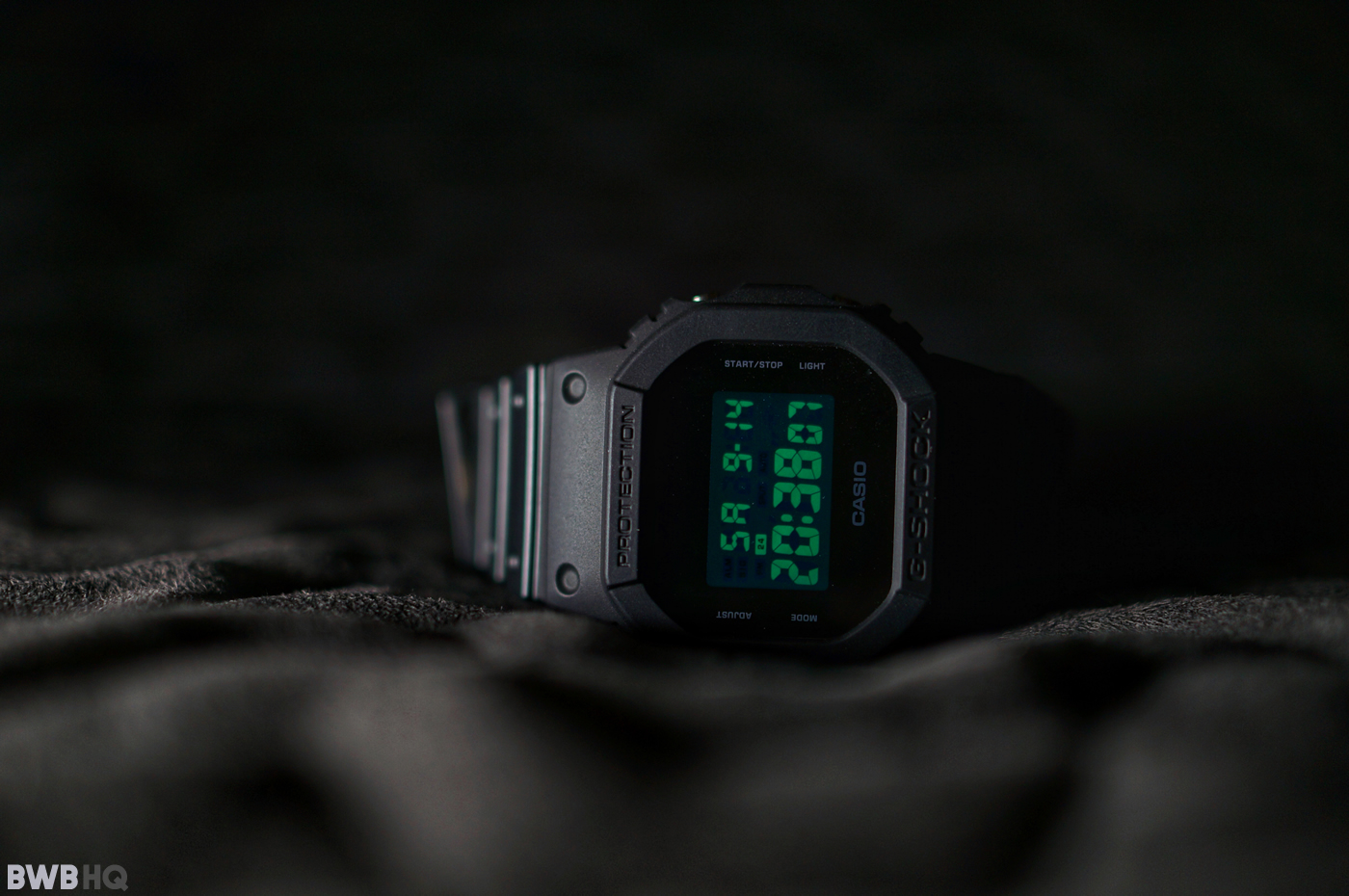 This is the part where form trumps function. I was skeptical at first as to whether visibility will be affected with a digital negative display. The answer is yes and no. When you are facing it straight and with some amount of light, the display can be crisp and clear until you tilt it to 45 degrees angle or more. Needless to say, at night it can be hard to read but that’s the price to pay for an ubercool stealthy look. Higher-end models will come with “super-twisted nematic” (STN) LCD display which provides higher contrasts and a wider viewing angle. 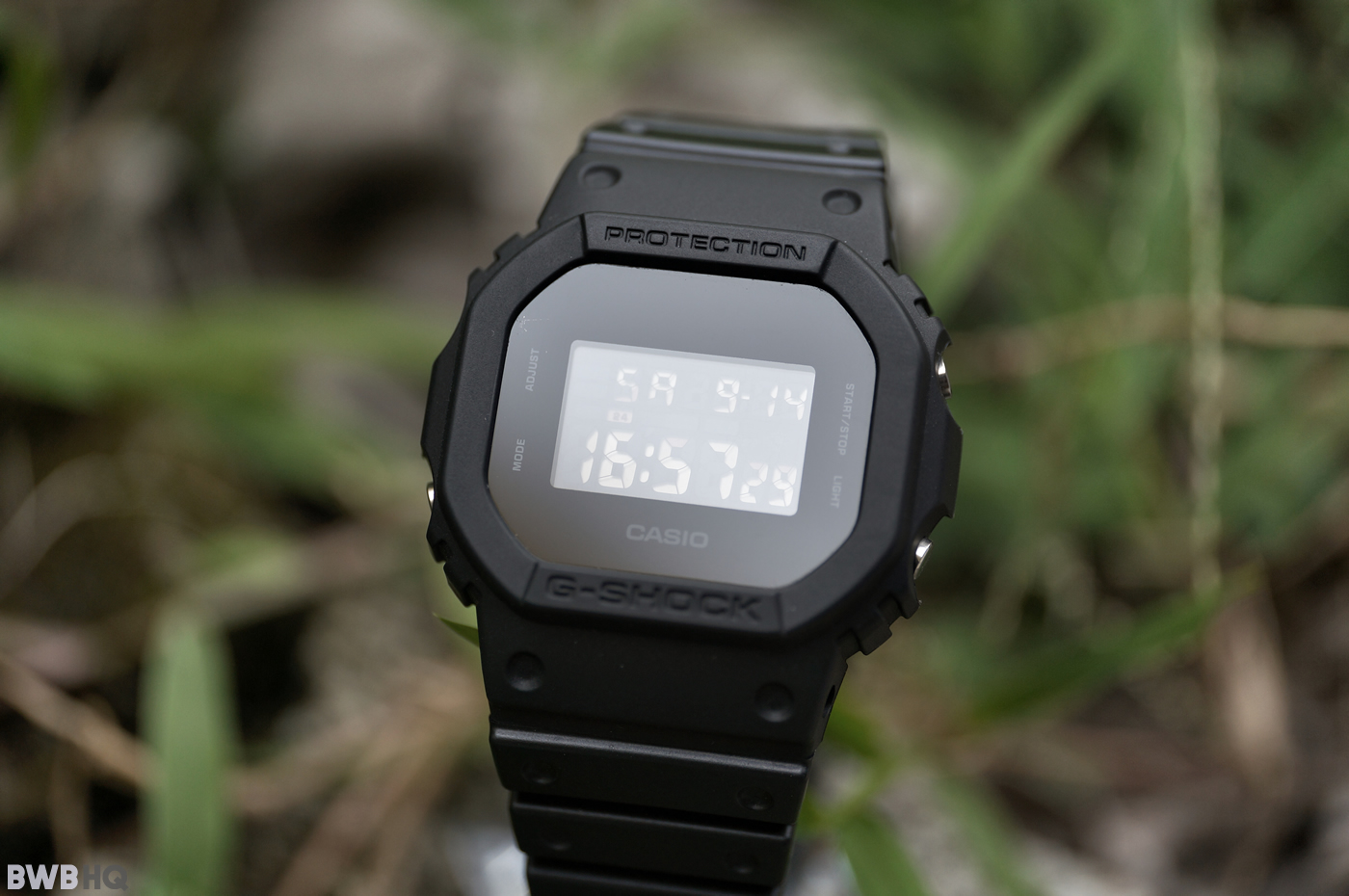 Spotting the very basic 3229 module which is powered by a CR2016 battery that runs around 2 years, it gives the most rudimentary of functions like 1/100 second stopwatch, countdown timer, basic alarm and full auto-calendar till year 2099. What I appreciate is the ability to still see the time when I’m in the countdown and stopwatch mode. Also in the dark the EL backlight fires up the screen with an aqua green color tone. It’s rated to have an accuracy of +/- 15 seconds per month. Missing is what would’ve been a very useful second timezone.

Operating the watch is pretty straightforward and you won’t be needing any reference to the manual. With 4 pushers namely a more recessed Adjust, Mode, Start/Stop and Light, it’s intuitive to navigate around the basic functions unlike their analog offerings.

The resin strap is comfortable and reasonably durable held by thick springbars. You might think the screws on the side has something to do with keeping the strap together but it’s more for holding the outer casing in place. The strap is designed to look like it’s integrated with the case and blends in well with the overall design. The buckle has a bead blasted finish and would’ve looked better it was in black to complete the overall look. While I would’ve loved the strap to be a little shorter but it still wears reasonably well even for smaller wrists. This is a common problem with most G-Shocks where the band can be excessively long where it protrudes too much from the keeper.

If resin strap is not your thing, there’s also a CORDURA nylon fabric version with the model number DW-5600BBN-1. I have also seen people swapping out the strap for other G-Shock combi bracelets, something which I have in mind. 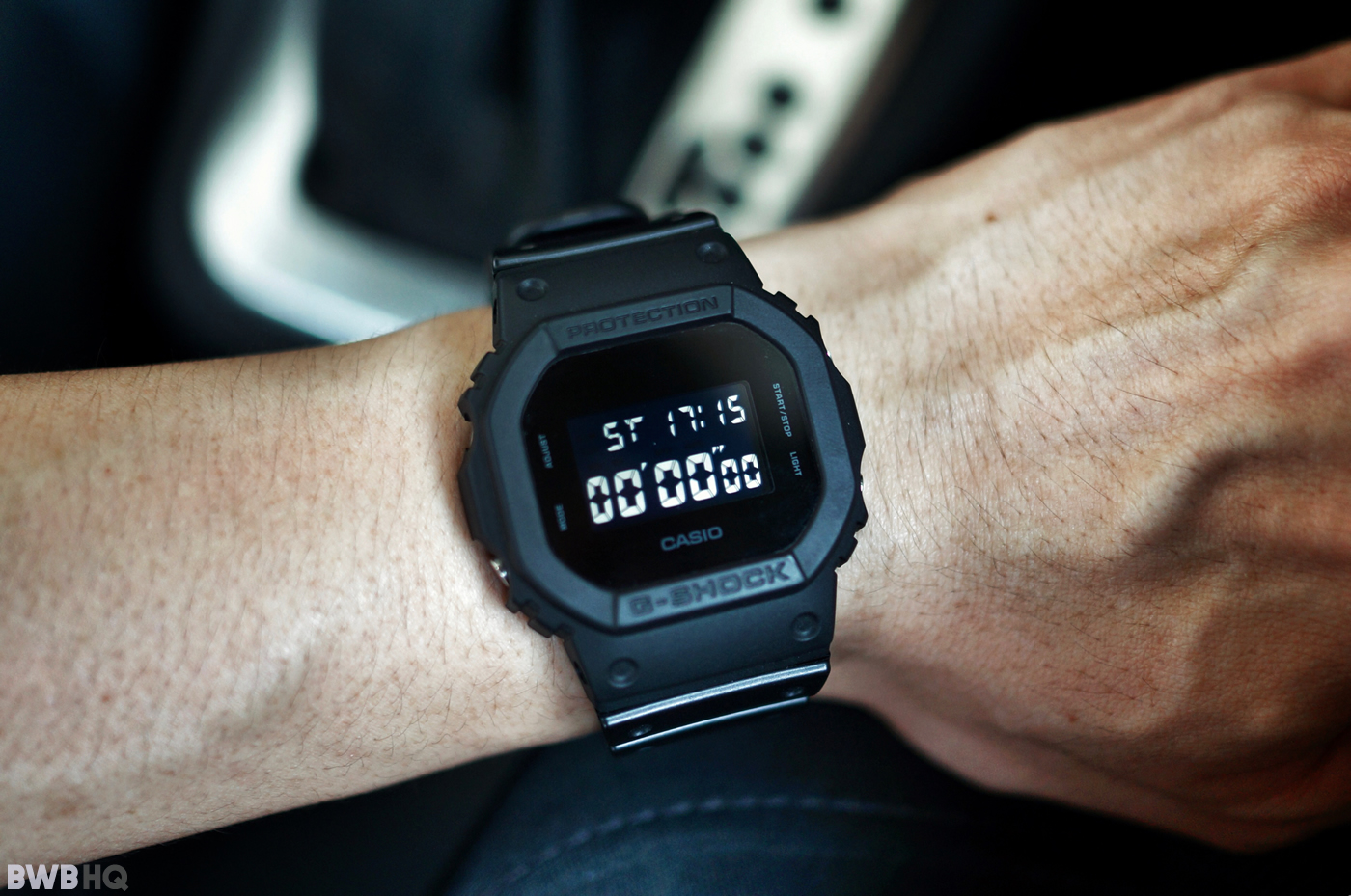 I for one had always found it difficult to find a G-Shock that was diminutive. When you strap the DW-5600BB on your wrist, you’ll notice that it doesn’t feel like the other chunky and heavy G-Shocks that it has evolved. It retains the DNA of the original G-Shock square design. At 42.8mm wide and a manageable lug to lug distance, it wears comfortably on smaller wrists as small as 6 inches. It’s light but yet feels it can take any daily beatings without breaking a sweat.

The G-Shock DW-5600BB-1 also known as the basic black which is probably what the BB denotes, has been around since the 2012 but remains one of their top-selling G-Shock watch in Japan. It’s a simple watch but its robustness, cool factor and insane affordability makes this a no-brainer. If I could convince a fellow colleague to make a purchase immediately after seeing the watch on my wrist, that says a lot about the watch. Also if you want similar aesthetics but with an upgraded ‘steel’ look, check out the recent G-Shock GM-5600B-1 release. 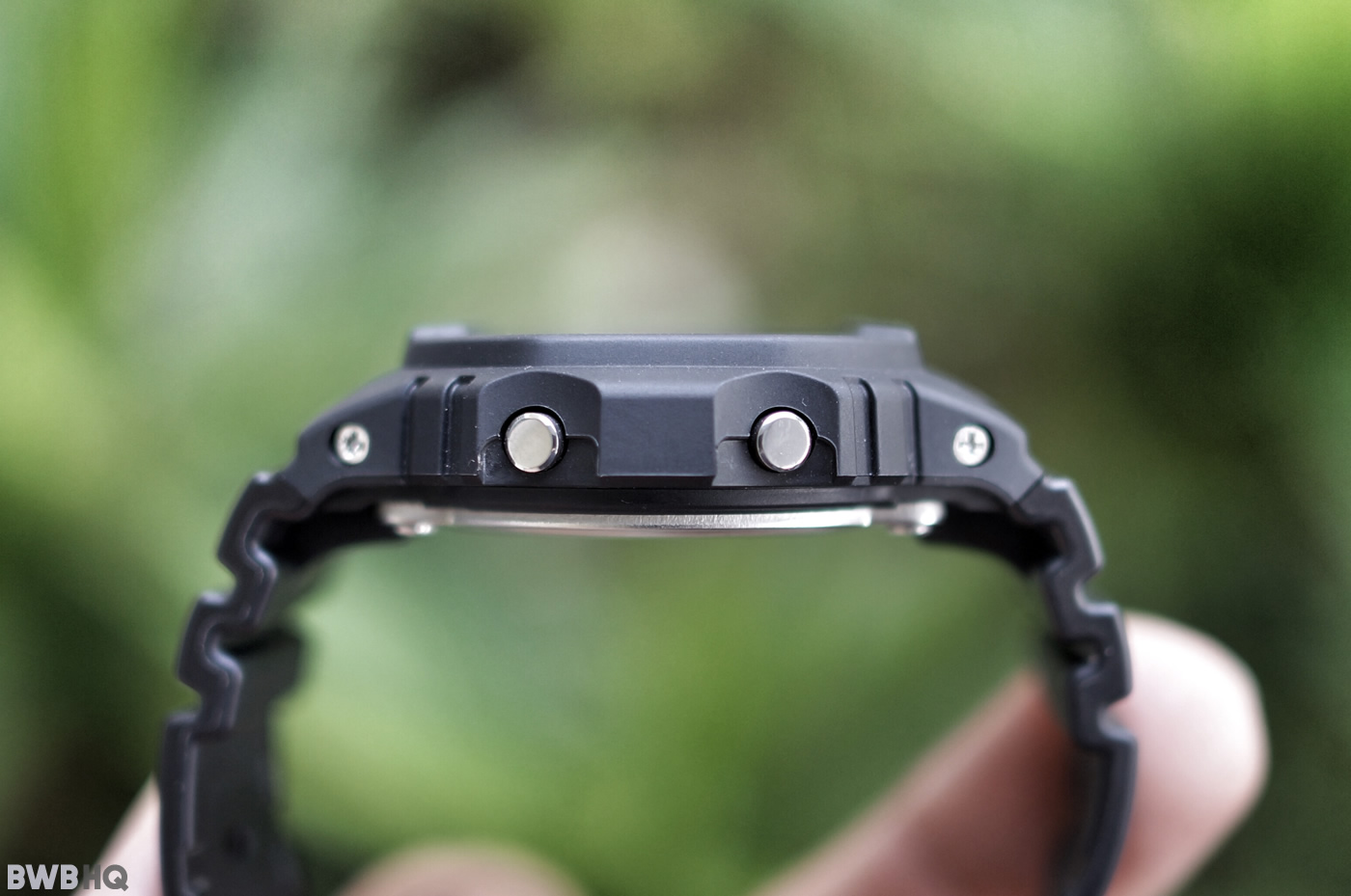