The Hamilton Khaki Field Mechanical which was released in 2018 was a huge hit for some obvious reasons. Rugged military inspired design, great 38mm size, and coming from a brand with rich history. Updates followed this year with new colors and an ‘upgraded’ movement which I will touch on later. Riding this vintage renaissance of sorts, Hamilton surprises again with this faithful reissue of the original Hamilton W10, a timepiece that was made for the British Ministry of Defense from 1973 to 1976 and more specifically for the Royal Air Force.

Let’s get straight into it. 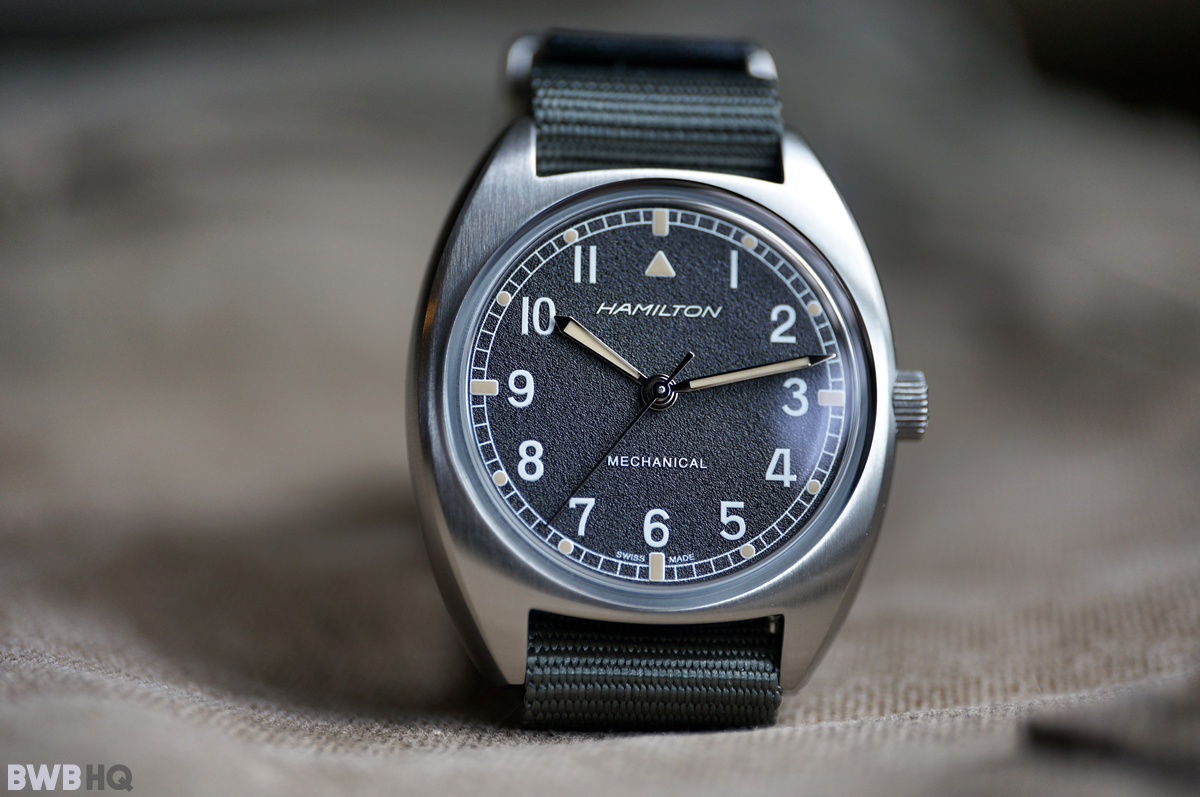 At first glance the case would be the most obvious almost 1-to-1 copy of the W10. Staying faithful to the original tonneau shape, it measures 33mm from 12 to 6 and 36mm from 3 to 9. I’m not sure why Hamilton decided to list the vertical length perhaps due to its unconventional case shape but that has caused the most misinterpreted dimension I have seen in a watch. Some reviews list this as a 33mm sized watch with a lug-to-lug length of 36mm. Personally measuring it, I can confirm that this is roughly a 36mm sized watch diagonally with a lug-to-lug of 42mm. It’s unfortunate that some comments I read were put off because they thought it’s too small at 33mm.

The case has a satin brushed like finishing that is just beautiful and when running your fingers over all its surfaces, you’ll find that most areas are smooth to the touch. If you look closer, you can even find a subtle beveled edge detail that is rather pleasing. The barrel shape while unique during that time is also functional providing much stronger lugs where it is shorter and thicker. I very much preferred this shorter lugs over the Khaki Field Mechanical where I find the lugs are a bit too long showing a huge gap when paired with two-piece straps. You will have no issues with that on this watch. 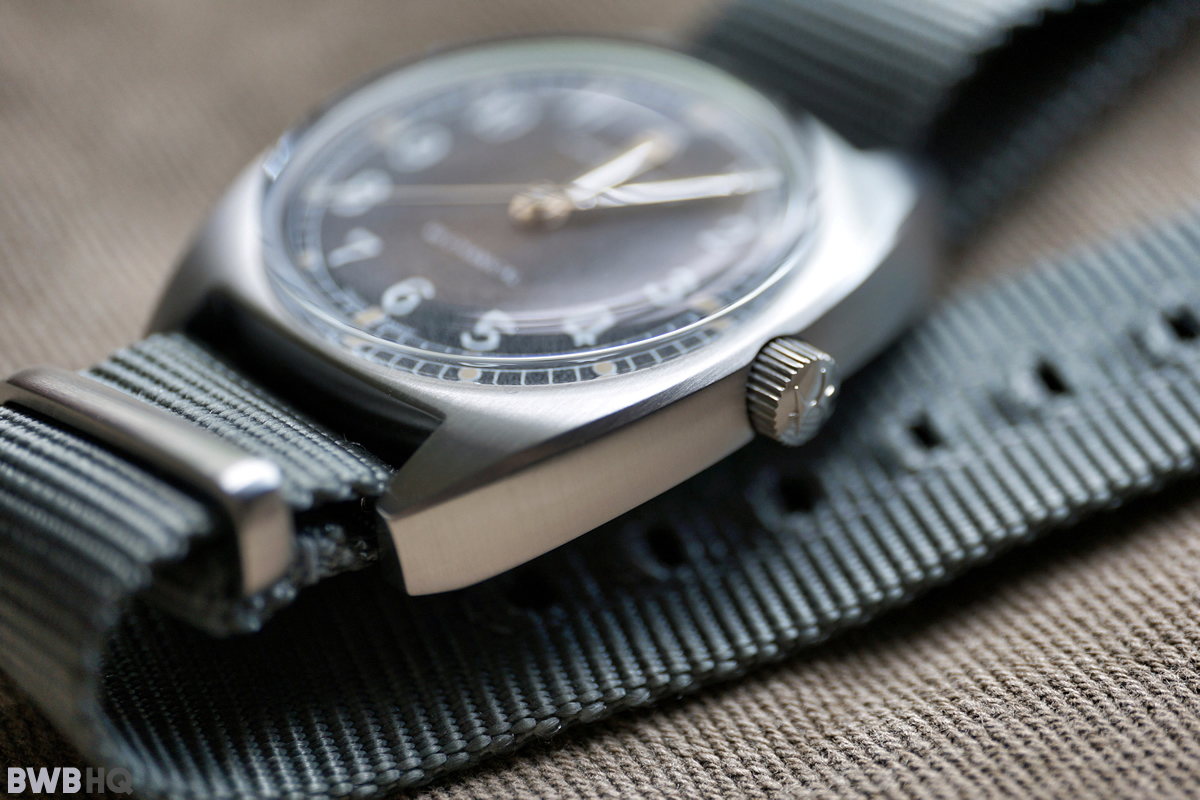 Notice that awesome side details

The boxed hardened mineral crystal with double anti-reflective coating does provide good legibility from any angle. While sapphire would’ve been good but if this holds up as good as my Seikos’ Hardlex which I have never gotten any visible scratches thus far then I have no issues with this. The crown is adequately sized and embossed with the Hamilton logo on its polished surface. The push pull crown makes winding the watch much easier.

Turning to the back of the case, you are presented with a solid brushed caseback which differs from the monobloc of the original. Held by 4 screws, it provides water resistance up to 100 meters which is a nice increase compared with the Khaki Field. The mixture of polished and brushed surfaces only visible at the back has a rather nice execution to it. The engraving provides more information about the watch including the reference number (H764190). 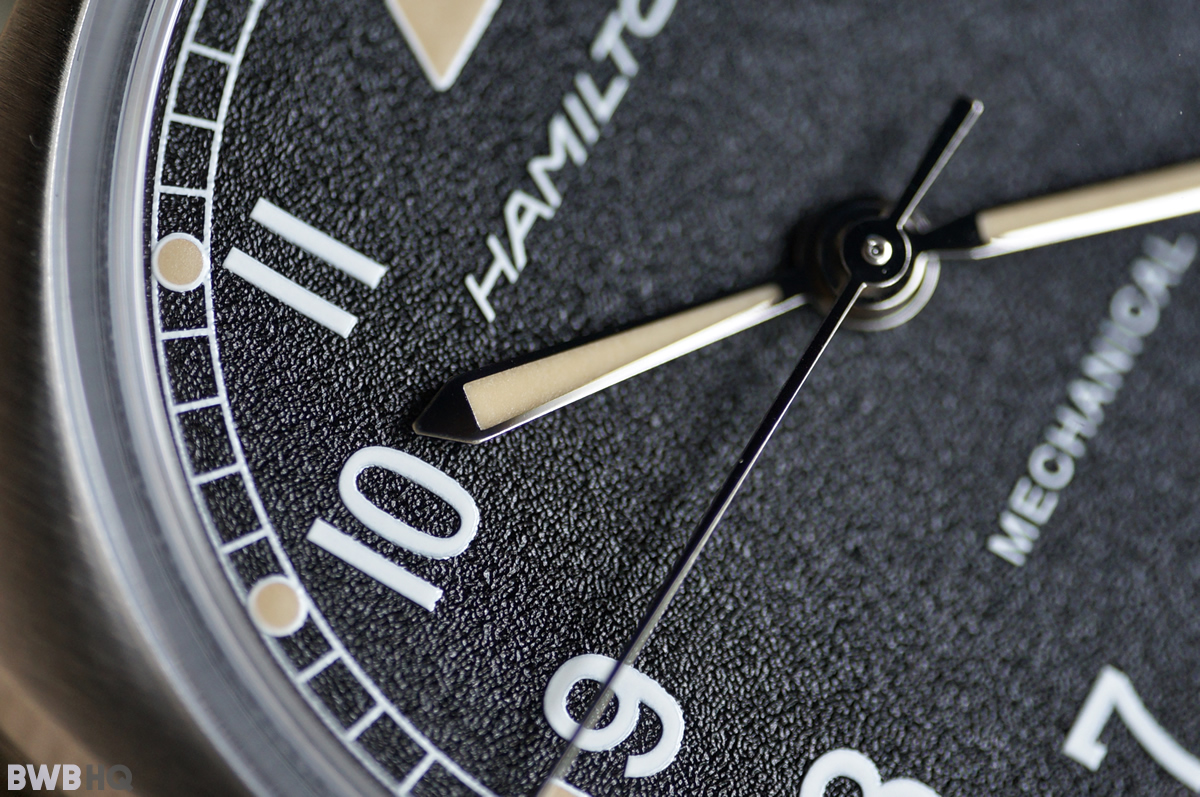 Apart from the impressive case, the matte textured dial is another sight to behold. The fine grained dial only appears upon closer inspection and mixed with the ‘railroad’ minute track, vintage lume and white Arabic numerals makes it a rather visually pleasing package. The faux patina is up for debate but I personally liked it. Let’s face it, modern lume will just not age like how Tritium will and most vintage lovers who wants a more usable daily piece would welcome it. I’ve tested the Super-Luminova vintage-style lume and it’s decent enough for a vintage looking piece but isn’t very long lasting.

Instead of going full utilitarian with brushed sword hands, it’s using polished finishing that’s made of nickel. It makes the watch more versatile in my opinion where you can even dress it up with leather straps. 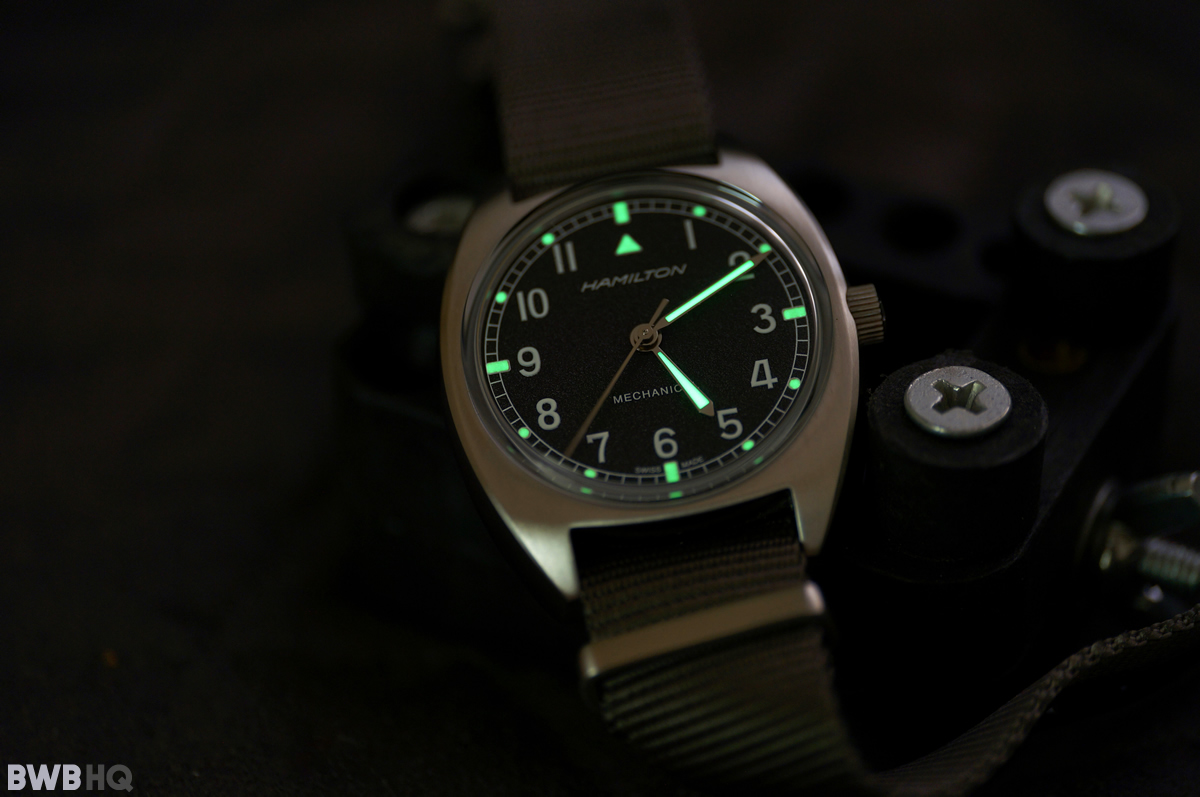 The H-50 movement which is also found on the Hamilton Khaki Mechanical is a modified ETA 2801-2 which had its frequency significantly reduced to 21,600vph. It has the same 17 jewels but a much increased power reserve of 80 hours. During my first week of testing, it was insanely accurate with almost 0 seconds deviation for the first 3 days. After a few weeks of use, it settled to -3/+3 seconds per day which is still very good. Also it managed to last an impressive 84 hours which translates to around 3.5 days of use. That means you can leave your watch to rest on a Thursday night and still pick it up running on Monday.

This hand-wound watch also has hacking mechanism where you can pull the crown and stop the seconds hand which will allow you to set the time more accurately. 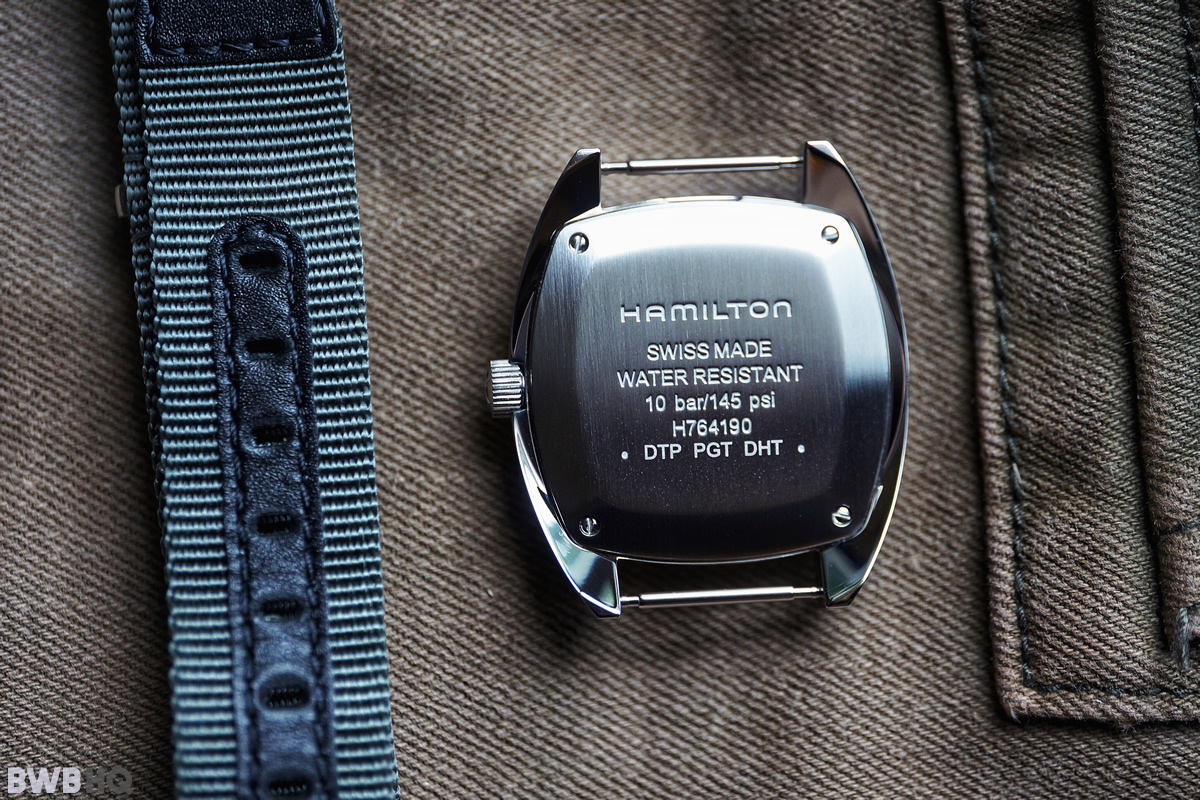 There’s two different strap offerings, one in brown leather NATO (H76419531) and the other in grey nylon NATO (H76419931). The one I have is the nylon version. It seems robust enough with some leather like material around the pin holes and at the strap end. The only issue I have is the textile strap could be difficult if not almost impossible to fold into the hardware as it’s thicker with the material. I love the signed thick buckle that comes with the strap. Also worth noting is that the leather version would set you back a further $50. Get the nylon version if you want to save up as you can easily get 18mm aftermarket ones for this strap monster. 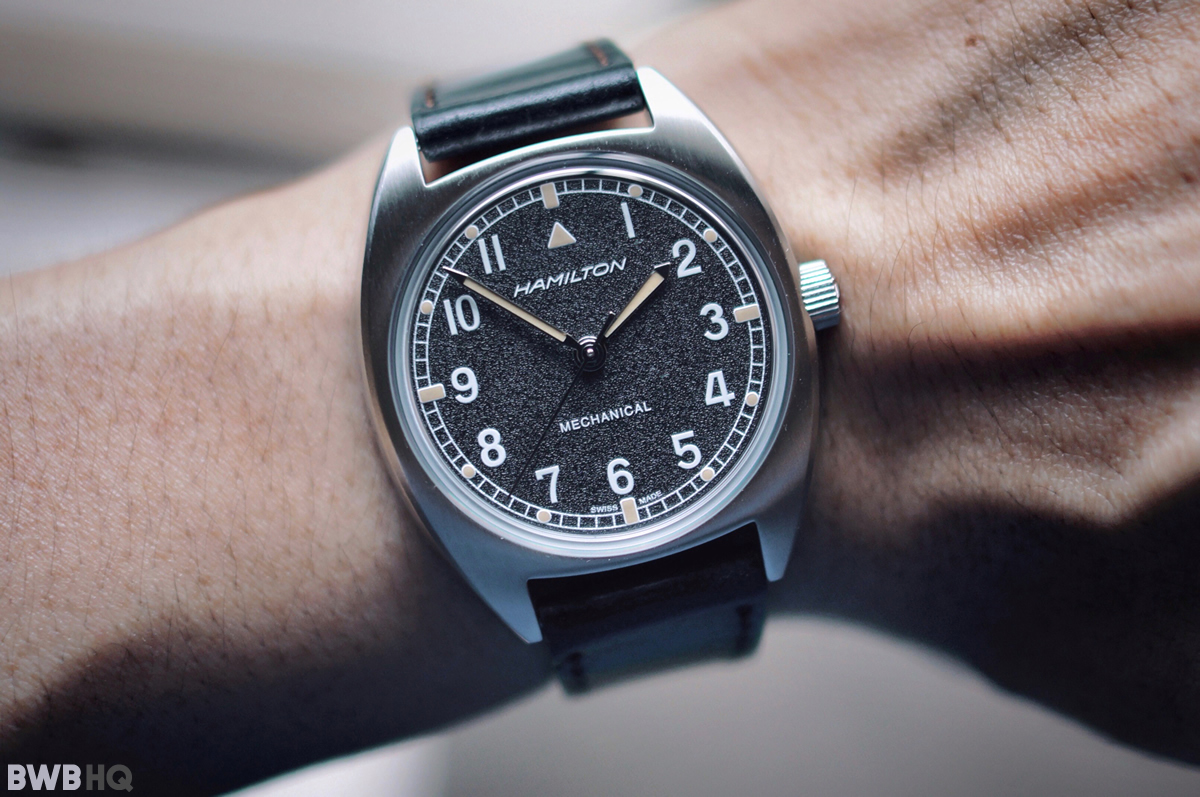 It wears like a dream on my smaller 6.1 inch wrists. The compact case wears slightly smaller due to the thinner case profile. Together with the boxed crystal, it measures at only around 10mm. In actual fact, it achieved this slim profile by having the dial and hands sit almost at the top of the case protected only by the crystal. The curved lugs also makes this wear very comfortably on the rest.

There’s plenty to like about this watch. A beautifully executed case, good water resistance, smaller dimensions, an interesting dial and a robust movement. While it does seem steep at around $845 for the nylon version and $895 for the leather, but I got this for around $600 after discount at a local AD. This makes it a no-brainer for me and I think this is another knockout winner by Hamilton.

If you’re interested, head on to Hamilton for more information or you can also get it from Amazon ($750). 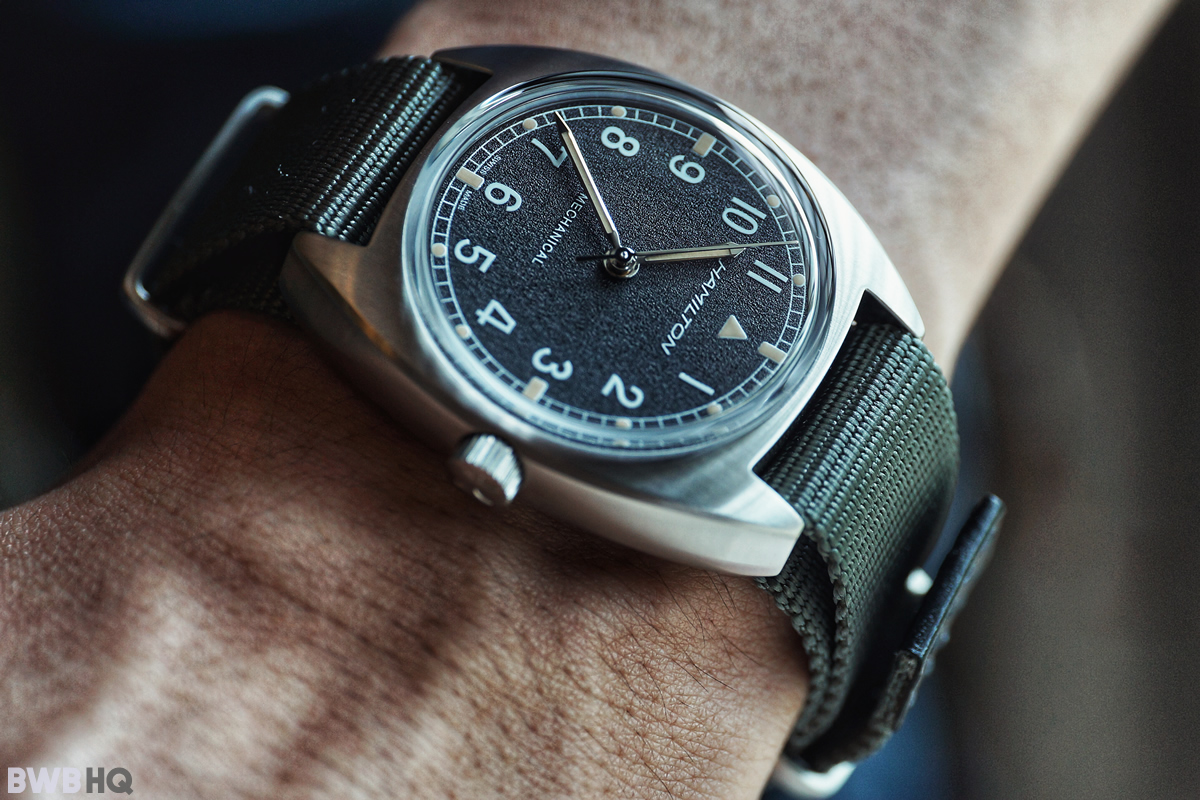 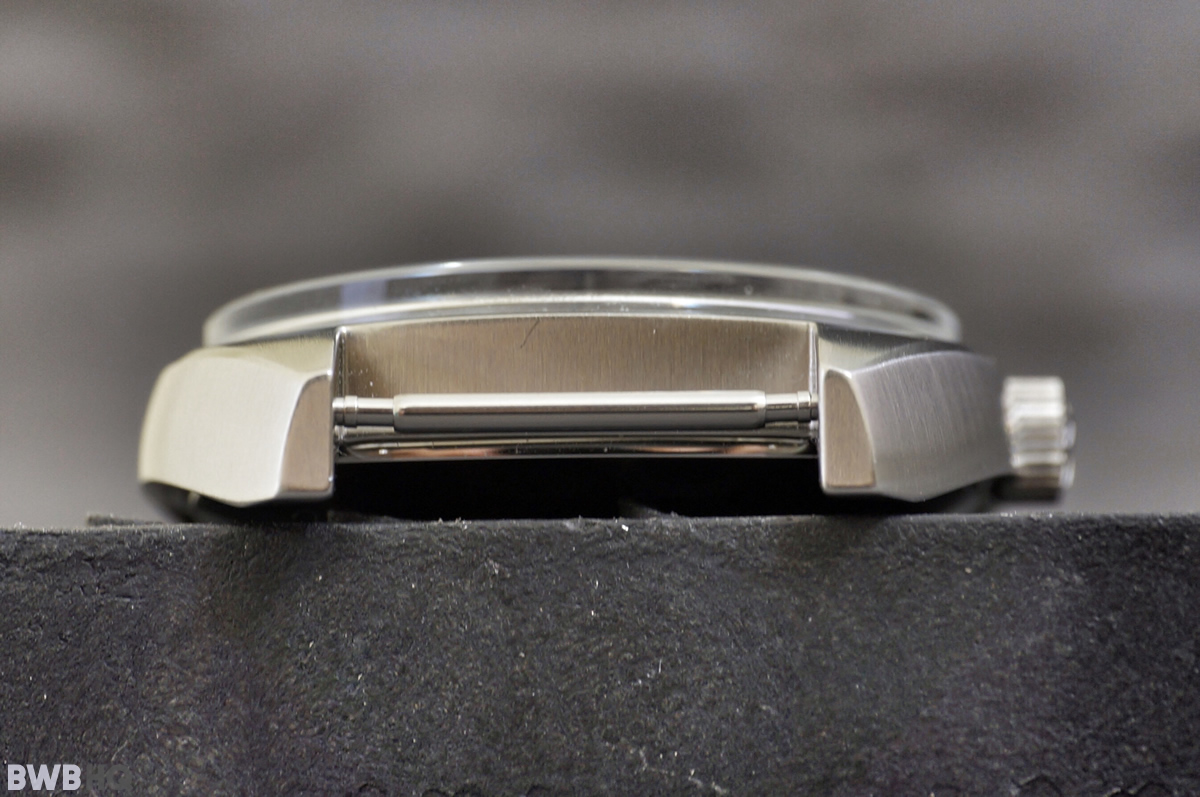 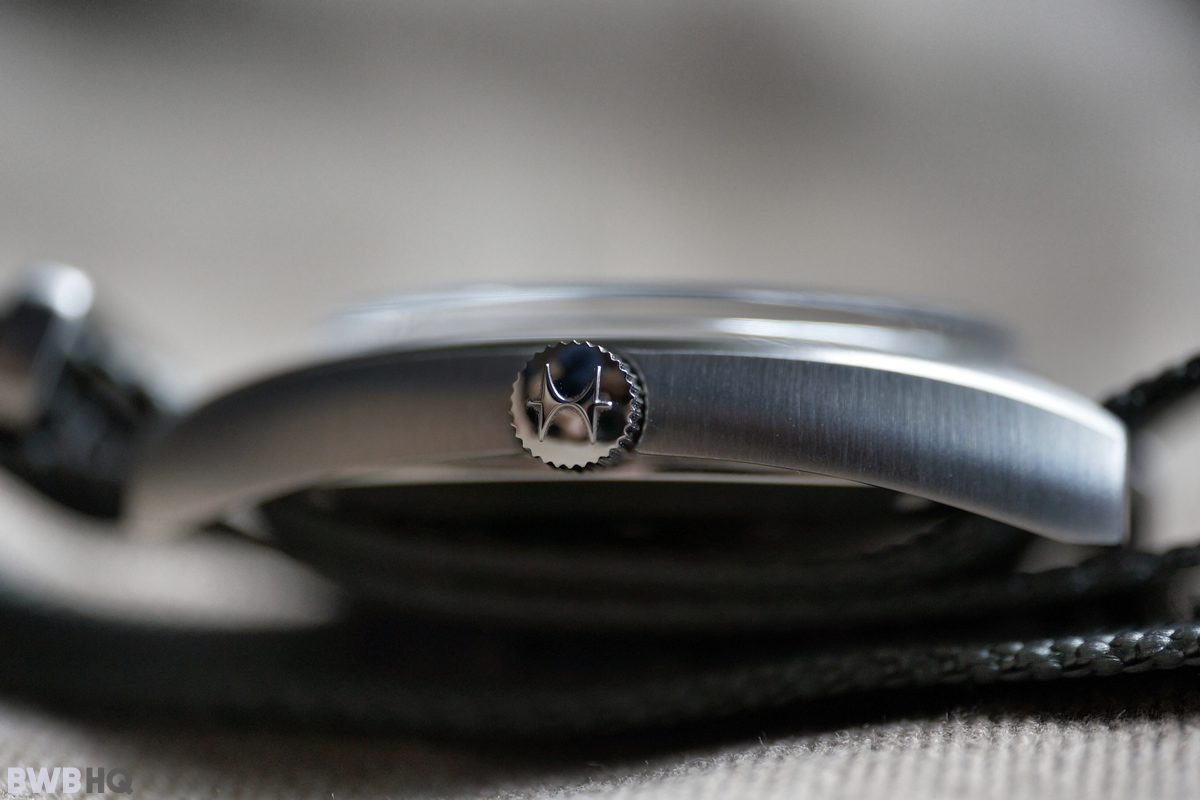